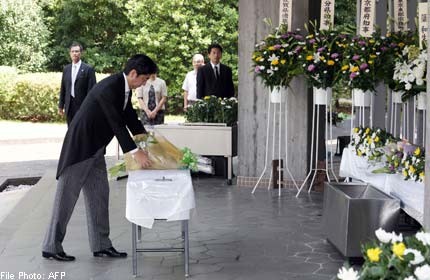 TOKYO - Prime Minister Shinzo Abe is, without doubt, the most well-travelled Japanese leader in recent years. Since taking office last December, he has visited more than 15 countries, including Mongolia. But it is the red carpet from Japan's two closest neighbours that eludes him.

This weekend, he leaves for Bahrain, Kuwait and Qatar - his second visit to the Middle East - to discuss energy policy and security. He is also adding a side trip to visit Japanese troops stationed in Djibouti to help combat piracy off the coast of the Horn of Africa.

Mr Abe has also vowed to go to Brunei, Laos and Cambodia by October, possibly with a team of businessmen in tow, thereby completing visits to all 10 ASEAN states, an unusual achievement for a Japanese premier, especially one who is not even a year in office.

Mr Abe is seeking not only to deepen ties but also to win the support of ASEAN states in dealing with China, which is proving to be an increasingly worrisome player in the region.

Still, his purpose in wooing ASEAN is, first and foremost, to open up more business opportunities for Japanese firms, just as he has done on trips to other regions.

Calling himself Japan's "top salesman", Mr Abe has pushed the country's nuclear power technology in Turkey and Poland, and its infrastructural know-how to countries in South-east Asia.

But the promise of generous funding to foreign governments does not necessarily give Japan the edge in bidding for contracts.

Recent reports say Japanese consortiums failed to win two tenders in Myanmar, one to upgrade Yangon International Airport and another to build the new Hanthawaddy airport.

Despite Mr Abe's promises of 91 billion yen (S$1.2 billion) in cheap yen loans and 190 billion yen in debt waivers during a May visit, Myanmar awarded the projects to international groups that include Chinese and South Korean firms.

Japanese firms won a project to repair and operate the airport in Mandalay that is worth far less.

Uppermost on his mind will no doubt be helping Japanese businesses to secure deals.

Amid the flurry of visits, however, the two toughest diplomatic challenges on his plate - mending frosty relations with China and South Korea - have shown little progress.

Japan and China are entangled in a territorial dispute over islets in the East China Sea that they call Senkaku and Diaoyu respectively.

But in a speech the same day, he gave a glimpse of his conservative colours by omitting the traditional expressions of profound remorse for Japan's past military aggression and renunciation of war, an act that could turn out to be more problematic than praying at Yasukuni.

Past Japanese leaders, beginning with Mr Tomiichi Murayama in 1994 and including Mr Abe himself during his first stint as prime minister from 2006 to 2007, had unfailingly delivered those lines.

While Mr Abe appears to be in no hurry this time round to make up with China and South Korea, it is probably closer to the truth to say that all three neighbours are reluctant to make the first move.

When Mr Abe became prime minister in 2006, he made Beijing his first overseas port of call to mend ties that had been chilled by his predecessor Junichiro Koizumi's annual visits to Yasukuni.

That breakthrough led to a successful visit to Japan the following year by then Chinese Premier Wen Jiabao.

The current tension is over Japan's nationalisation of the East China Sea islets last September and not just Yasukuni.

Beijing wants Tokyo to acknowledge that there is a dispute before it would sit down to talk. Mr Abe has repeatedly refused to accept any conditions.

"Chinese leader Xi Jinping has decided that so long as Abe refuses to give way on Senkaku, there will be no summit talks.

For Japan, it is a question of territorial sovereignty. Conceding on Sen-kaku may see China later asking for Okinawa," said China scholar Koichi Sato of J.F. Oberlin University in Tokyo.

In Seoul, President Park Geun Hye has hinted at possible conciliation with Japan but baulks at the repeated visits to Yasukuni by Japanese ministers, three of whom went to the shrine last week.

Observers say China and South Korea are holding back on a summit, for fear that Mr Abe may pull the rug from under them once the talks are over.

For one thing, he may decide to visit Yasukuni. The next big date is the shrine's an-nual autumn festival in October.

A survey by the influential Asahi Shimbun daily last year found that only 52 per cent of Japanese see the Sino-Japanese war as a war of aggression perpetrated by Japan, compared with 99 per cent of the Chinese.

Said Asahi in a recent editorial: "This perception gap is very deep. In this age, we cannot talk about Japan's future without including Asia. Let us ponder over why our neighbours continue to be angry with us."

A worthwhile suggestion. But is Mr Abe listening?