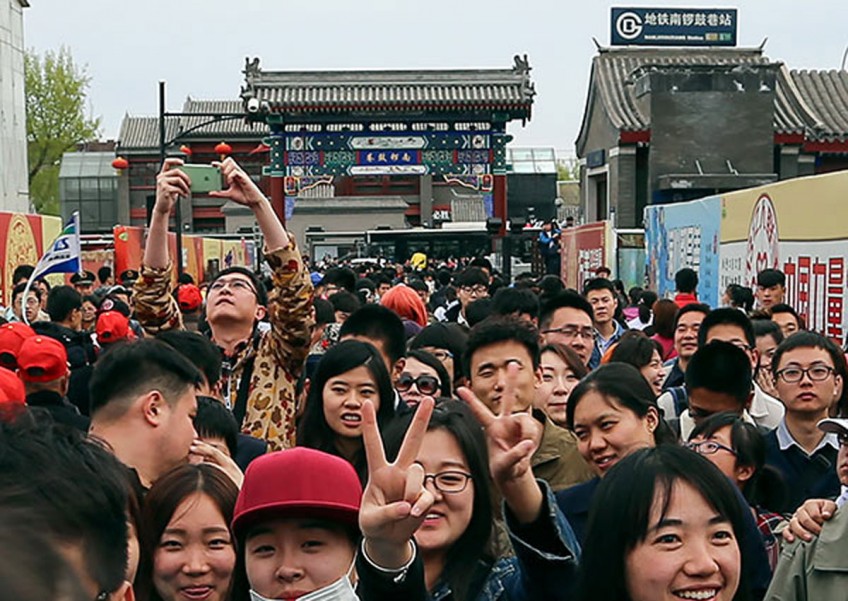 The Nanluoguxiang area of Beijing is crowded during the Tomb Sweeping Day holiday earlier this month. The city's tourism authorities say the number of visitors can hit 100,000 a day during public holidays.
China Daily

Nanluoguxiang, a famous ancient alleyway in Beijing that is packed with small tourism shops, bars and restaurants, has become a victim of its own success and will no longer accommodate tour groups because of the huge numbers of people who visit the scenic spot each day.

The change will take effect on Monday, the municipal tourism authority said.

More than 30,000 people visit the alleyway each weekday, and the number climbs to 50,000 on weekends and has been known to hit 100,000 on public holidays, said the Beijing Municipal Commission of Tourism Development.

The daily influx of visitors greatly outpaces the safe capacity of Nanluoguxiang, which is able to comfortably cope with 17,000 visitors a day, according to the specifications of the national tourism authority. A lower number of daily visitors would guarantee tourists' safety and the quality of the environment and improve the lives of neighbouring residents, said the authority.

Critics of the currently overcrowded situation say hoards of tourists in the street cause traffic congestion in the neighborhood and leave little room for emergency vehicles or space for an evacuation. They are also said to pose a risk to the historic buildings.

The tourism authorities have also approved removing the alleyway from the city's list of National AAA Grade scenic areas, something it hopes will also reduce the number of visitors.

Nanluoguxiang, which was one of the first 25 historical and cultural street blocks to be protected in Beijing, has a history stretching back more than 740 years. It is 787 meters long, and has eight symmetrical alleys, known as hutong, on either side.

Many tourists sites in the capital, including the Palace Museum, have had to deal with similar problems because of the overwhelming number of visitors and have restricted access.

In the case of the Palace Museum, around 80,000 people a day now visit, following restrictions brought in last year. Previously, busy days could see as many as 180,000 visitors