Tourists in Cambodia pose for photos with children in dumpsite 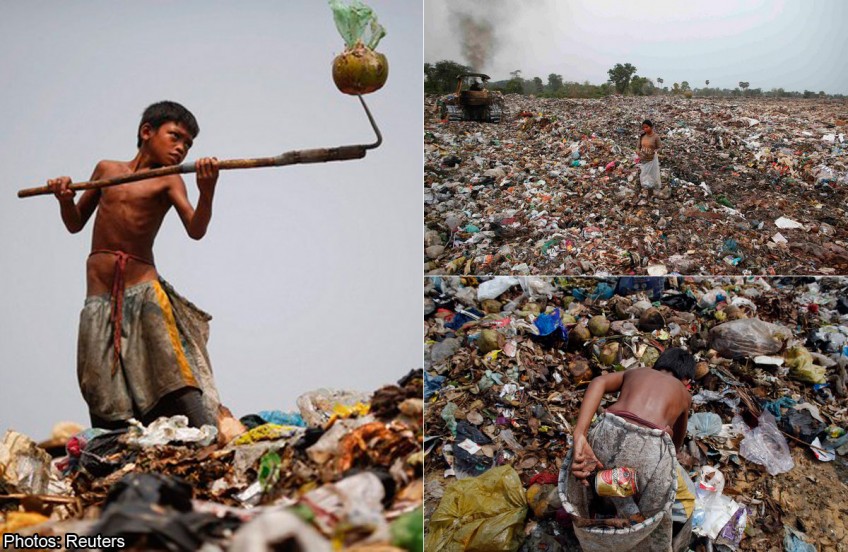 Young Soburn spends her morning collecting scraps of food to be used as pig feed. The 11-year-old attends school in the afternoon.

Anlong Pi, an 8ha dumpsite where she lives and works, is near Siem Reap, Cambodia. It has recently become a tourist attraction in its own right.

Sightseers visit the dump and pose for pictures with children such as Soburn, Reuters reported.

More than 150 families live at the site, according to a representative of a company overseeing the waste.

Children as young as nine scavenge scraps for a living, making between 35 cents and $2.75 a day.

Spaniard David Rengel visited the dump site to document child labour issues late last year and ended up helping to expose one of the darkest sides of tourism we've ever seen, news.com.au reported.

Mr Rengel said the wasteland has morphed into a voyeuristic tourist stop with guides - a place where dozens snap photos of the unfortunate workers.

He told news.com.au: "When I got to the landfill, my initial work was focused on child labour.

"But while I was doing my report, I saw that tourists began arriving, sometimes in buses and other times in tuk-tuks.

"It was awful. I asked the people who live and work in the dump if it was an isolated case or if it was frequent and they told me that every day tourists arrive at the landfill."

Mr Rengel said the tourists were mostly looking for children and wanted to take pictures with them. They gave some candy to the children.

A charity, Friends-International, which assists marginalised urban children around the world, has called for this practice to end. They have been working with families at Anlong Pi since 2010.

Reuters photographer Athit Perawongmetha blogged about his experience after vising the dumping site. As he walked around the site, he noticed a few people throwing stones at a dog. His Cambodian friend told him that they suspected the dog had rabies.

Mr Perawongmetha continued working in the area for some time before his Cambodian friend told him that they had killed the dog and was preparing to cook it.

He wrote: "The body of the dead dog was lying in a sack next to the blaze. They all looked so happy as they waited for their meal.

"I wasn't sure whether the dog meat was safe to eat but everybody looked cheerful."