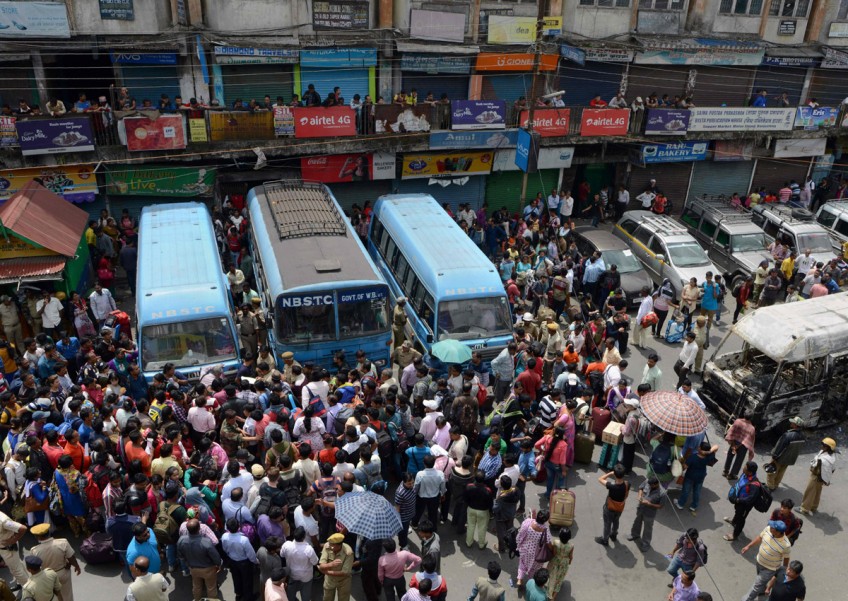 Indian travellers wait for government-provided buses following clashes between police and protesters supporting the Gorkha People's Liberation Front (GJMM) in Darjeeling on June 9, 2017. Indian security personnel have been deployed in Darjeeling following violence on June 8 during a protest by supporters of the Gorkha Janmukti Morcha (GJM) organisation against the use of Bengali in local schools.
AFP

KOLKATA - Thousands of tourists fled the Indian hill resort of Darjeeling after separatists warned that a general strike could degenerate into violence.

Hundreds of troops and riot police patrolled the streets of the famed tea-producing resort in eastern India yesterday, as panicked tourists packed their bags.

Riots and arson attacks in Darjeeling last week left 12 injured, and the Gorkha Janmukti Morcha (GJM) group warned over the weekend that "untoward" events could happen when the general strike started yesterday.

The hills are famous for the Darjeeling tea whose production is jealously guarded. It is also famed for its "toy train" - a 78km uphill ride from New Jalpaiguri.

However, the troubles have dealt a major blow to the region's crucial tourism industry.

Pradip Lama, secretary of the Darjeeling Tourist Association of Travel Agents, said worried visitors were leaving and nearly 70 per cent of bookings had been cancelled.

GJM wants to set up its own state named Gorkhaland in the hill region, which is now part of West Bengal.

Tensions have risen again in Darjeeling over a government decision to introduce the Bengali language in schools. Indigenous Gorkhas, who mainly speak Nepali, are furious.

"We had heard about the trouble and still reached the hill resort on Friday, hoping that the situation would be normal," Priya Roy, a tourist from southern Bangalore, said.

"We have decided to leave Darjeeling after GJM's warning to tourists."

GJM head Bimal Gurung said his "warning to the tourists was for their own safety" as things could worsen if his group launched a full-scale campaign for a separate state.

The Gorkhas have campaigned for decades for a homeland, saying that Bengali-speaking outsiders have exploited their resources and imposed their culture and language.