Transmission won't stop unless 80 per cent of Jakartans stay at home: Epidemiologists

A general view of a traffic jam during large-scale social restrictions amid the coronavirus disease (Covid-19) outbreak in Jakarta, Indonesia, May 19, 2020.

Jakarta Governor Anies Baswedan has extended the city’s large-scale social restrictions (PSBB) until June 4 in an effort to completely stop transmission after studies found that the Covid-19 reproductive ratio in the capital had been dropping since restriction policies were applied in mid-March.

The ratio refers to the expected number of people one person with the disease will directly infect in a population susceptible to the disease.

A study by researchers from the University of Indonesia’s School of Public Health found that the reproductive ratio in Jakarta had decreased from 4 in mid-March to 1.11 on May 17.

“The coronavirus will not go away. But if we can reduce the ratio to less than one, it will spread much slower. We must make greater efforts to achieve that,” said Pandu Riono, a UI epidemiologist who was involved in the study, on Wednesday.

Roughly a month before PSBB was enacted on April 10, the city administration closed down schools and public facilities and called on people to stay at home.

The restriction policies caused nearly 60 percent of Jakarta’s residents to stay at home, according to the UI team, which analysed data from Google's Covid-19 Community Mobility Reports, which tracks changes in the travel behaviour of Android users.

New cases, however, began rising again during Ramadan as people spent more time outside their homes during the afternoon and evening, the study found.

“[Covid-19 transmission] will not stop unless at least 80 percent of the population stays at home,” Pandu said.

He found that people's mobility in certain regions, including in densely populated areas in Petamburan in Central Jakarta and Sunter Agung in North Jakarta, was higher than that of others. Petamburan and North Sunter are the two subdistricts with the most cases in the capital.

“The Jakarta administration needs to focus on regions [with poor compliance with the stay-at-home instructions] in the days ahead,” Pandu said. 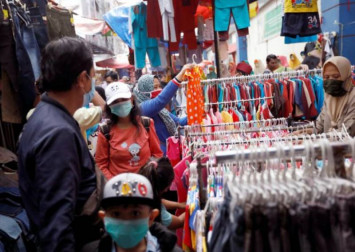 The findings concur with a separate study by the Tarumanegara University Center for Metropolitan Studies, which mapped the spatial patterns of the spread of the disease.

“We suggest the administration use an emergency response. Areas with the highest number of cases should have different handling procedures,” said Suryono Herlambang, one of the researchers.

As of Thursday, Jakarta had reported 6,301 confirmed cases. Sunter Agung had recorded the highest number of cases at 142, followed by Petamburan with 126 cases and West Pademangan in North Jakarta with 117 cases. The other regions of Jakarta have recorded less than 100 cases each.

A spike of cases also occurred in Sunter Agung's densely populated community unit (RW) 01, located about 500 meters away from the mosque.

In Petamburan, subdistrict head Setiyanto said no new clusters had been recorded after a cluster of 72 infections was found in the dormitories of the Bethel Indonesia School of Theology .

As the virus has begun to infect residents of the city's most densely populated areas, the Jakarta health agency has been conducting rapid antibody tests over the past few weeks to head off new infection clusters.

The agency’s public health department head Fify Mulyani said it had performed rapid tests on 110,090 people and had collected swabs from 4,135 people who provisionally tested positive for the virus to conduct the more accurate polymerase chain reaction (PCR) tests. 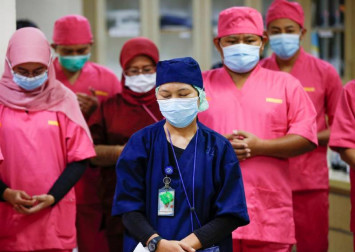 Anies, meanwhile, was aware that there were many people violating PSBB, even after he issued a decree on May 11 that permitted sanctioning violators of PSBB or of the social distancing policy imposed in the capital. The decree stipulates punishments ranging from community service to fines.

Anies said the 14 days after the PSBB extension would be a defining moment for the capital in the effort to reduce cases. He urged all Jakartans to avoid going outside their homes, even during the upcoming Idul Fitri holiday, expected to fall on Sunday.

“We’ve progressed much in the last two months, but this isn’t over yet. We will not ease [PSBB],” he said. “For those who are not yet staying at home, please join our cause.”

For the latest updates on the coronavirus, visit here.
#INDONESIA #coronavirus #COVID-19