Ryo Maeda plays with his sons at their home in Shiso, Hyogo Prefecture.

TOKYO - A man in Hyogo Prefecture holds lectures across the country to share his experience and happiness of being the father of two children. He also talks about how he suffered over having been born physically female, and how he changed the official recognition of his gender status under a special law.

He hopes the lectures will help the public “realize that the shape of a family and its happiness have become diverse today.”

Under the Law on Special Cases in Handling Gender for Persons with Gender Identity Disorder, which came into effect in 2004, it is legally accepted that those who suffer gender identity disorder may change the official recognition of their gender status. Since the law’s enforcement, some such people marry after changing the recognition of their gender status, but only a few make their past and present lives public.

In his lectures, titled “I Became a Father,” he always tells the audience: “I’d long suffered over accepting my gender identity disorder. But [because I did so], I could meet my wife and sons. I now think it was good [that I have accepted it].” 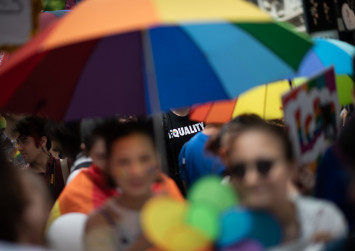 He uses Ryo Maeda as his name when he gives lectures at the invitation of schools and administrative organizations.

In the lectures, he talks about how he and his wife, both 36, and their 9- and 6-year-old sons — born through in vitro fertilization with a third-party donor’s sperm — set up a family.

The 2004 law gave Maeda hope. Under the law, people with gender identity disorder can change the recognition of their gender status on a family register after undergoing a sex-change operation. Maeda underwent an operation, taking the opportunity to start dating his future wife, and then married her as a man.

They decided to have a baby through artificial insemination and were blessed with their first son when Maeda was 27 years old. He recalled, “I found a reason to live.”

However, he soon faced a big hurdle.

Maeda submitted a birth registration, which was dismissed on the ground that “it was obvious that he and his son don’t have a blood relationship, based on the entry in his family register that he had changed the recognition of his gender status.

In the case of an ordinary married couple, a baby born through artificial insemination with a third party’s sperm is legally considered to be the couple’s child.

“We’re a legally married couple, too. I was longing to be the father of my son,” Maeda said.

He then filed a lawsuit. His appeal was dismissed at the first and second courts. But, Maeda did not give up, because he wanted to “tell his son that if something is wrong, it’s important to say so out loud.”

It was in 2013 when the Supreme Court judged the child to be Maeda’s son. At that time, his older son was already 4 years old. Back then, there were more than 40 couples in the same situation.

After the top court decision, the Justice Ministry changed its policy, and the name of a person who has changed gender identity to a man can be entered in the paternity column on a family register.

While the trials were going on, Maeda was subjected to online comments such as, “It’s pitiful to be a child of people with gender identity disorder.”

Maeda tells his two sons: “Your father was born as a woman because of God’s mistake. And now, I have returned to being a man.”

He takes his sons to his lectures and has them listen to his experience.

“I want to keep engaging in my activities to create a society where my sons and sexual minorities are free from prejudice and feel safe to live,” Maeda said.