Traveller numbers at Hong Kong airport in biggest drop since 2009

A traveller loses patience with protesters at Hong Kong airport, who occupied the site in August.

Hong Kong International Airport recorded its biggest fall in passenger numbers in a decade last year to fall behind its Guangzhou and Shanghai rivals for the first time ever, as anti-government protests hit tourism to the city hard, new figures revealed on Sunday.

Still one of Asia's busiest airports, HKIA handled 71.53 million travellers in the tumultuous year, 3.2 million down on 2018, according to figures released on Sunday by the Airport Authority.

The 4.2 per cent fall is the biggest drop since the global financial crisis caused a 5 per cent decline in 2009.

Travellers were still staying away in the final month of the year, when 5.7 million passengers used the airport, some 813,000 fewer than in December 2018.

The year started well for the airport, passenger numbers to July up 1.03 million on the same period of 2018. But that gave way to decline once the protests took hold, sparked by opposition to proposed extradition legislation.

Street clashes between protesters and police escalated in violence and spread across the city, even making it all the way to the airport after it was occupied by demonstrators. The unrest still has not ended, and is in its eighth month.

Between August and December, the total number of passengers at HKIA fell by 4.1 million, or 19 per cent, year on year, as the unrest started to deter tourism.

The airport's monthly report highlighted weak visitor traffic to and from mainland China and Southeast Asia in December. However, transit traffic and travel by city residents were up 14 per cent and 9 per cent respectively.

The annual decline meant that, for the first time, HKIA served fewer passengers in the year than Baiyuan Airport in nearby Guangzhou, where that number grew to 73.3 million, and Shanghai Pudong, where it topped 76.1 million. More than 100 million passed through China's busiest airport, Beijing Capital.

It was still the world's busiest airport for cargo, of which it handled 4.8 million tonnes in the year, down 6.1 per cent on 2018, a fall attributed to trade friction and slower economic growth.

"We went through a challenging year in 2019," Vivian Cheung Kar-fay, executive director of airport operations for HKIA operator the Airport Authority, said. 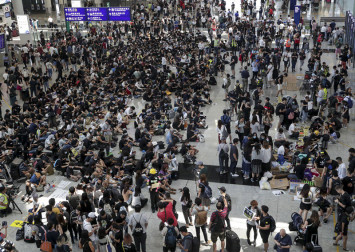 She sought to look to the positives of 2020, which include expanded facilities and upgrades to the passenger experience, including a bridge linking two passenger terminals.

But Cathay Pacific Airways, which controls about half of HKIA runway slots, warned 2020 was expected to be "highly challenging".

Both Cathay and fellow local carrier Hong Kong Airlines have shrunk their numbers of flights into and out of the city, as have foreign entities including Emirates, Singapore Airlines and United Airlines.

More recently, Korean Air and Air China were among those cutting one each of multiple daily flights from Hong Kong, to Seoul and Beijing respectively.

Airlines are still waiting for the government to help cut the cost of using HKIA. Last September, a coalition of carriers appealed to the government to help them cope with the downturn in traffic as protests grew. Officials indicated in early December that they would mull cutting airport parking and landing fees. 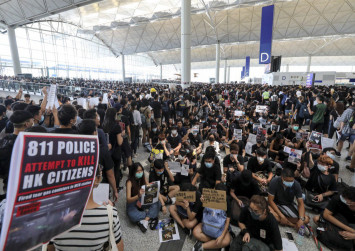 The city's biggest airline has recovered from several consecutive months of protest-related decline by wooing transit passengers with cheap fares.

Visitor arrivals to the city as a whole dropped to 55.9 million in 2019, down 14.2 per cent on the previous year, caused by a sharp decline in mainland Chinese tourists, according to official statistics.