Tsai issues strict instructions on military as commander in chief 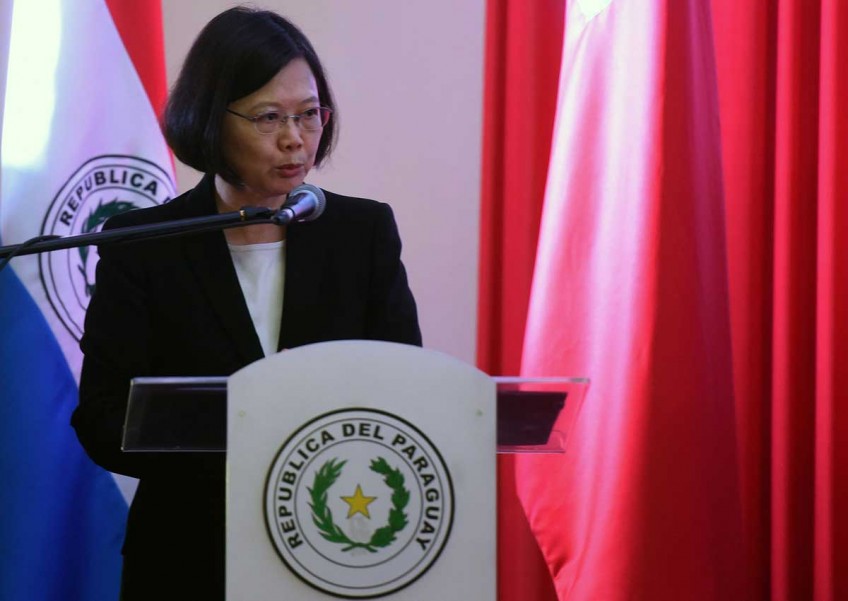 Taiwan's President Tsai Ing-wen delivers a speech during her visit to the General Andres Rodriguez school to which the country donated computers, in Asuncion on June 29, 2016.
AFP

TAIPEI - Upon returning to Taiwan on Saturday, President Tsai Ing-wen expressed deepest regrets over the death of the Taiwanese skipper killed when a missile was accidentally fired from a Navy vessel on Friday, and laid out strict instructions after being briefed on the incident late Saturday night.

As commander in chief, Tsai stated that she cannot accept such an undisciplined military unit, and ordered the Defence Minister and Navy Command Headquarters to carry out their instructions immediately, according to Presidential Office spokesman Alex Huang.

The Navy Command Headquarters would conduct a revamp and review of fleet management and personnel training -- both in training and combat operations. She expected to see results in the shortest time possible.

Tsai instructed the Defence Minister to shoulder responsibility for the entire incident, and to provide a comprehensive report on improving weapons system operations in two months. The president believed that Friday's incident was the result of a severe problem in the base's safety procedures.

She also extended condolences to the family of killed skipper Huang Wen-chung and regards to the three injured crew members.

The case is currently undergoing legal procedures and investigations, with Tsai also ordering the military to assist in all manners possible. The military should also provide a clear explanation to Huang's family and the public.

The Navy accidentally fired a Hsiung Feng III supersonic anti-ship missile during a drill Friday morning that ripped through a Taiwanese fishing vessel in the waters off Penghu, killing one and injuring three.

Speaking at Taoyuan International Airport after wrapping up her first state trip abroad, the Ying Hsiang Project, Tsai quoted the widow of the killed skipper Huang: "Such an incident should not have occurred at all."

Tsai arrived at Taoyuan International Airport at 4:20 p.m. on her China Airlines charter plane, ending her nine-day trip to Panama and Paraguay. Her first state trip also involved transit stops in Miami and Los Angeles. Four Mirage 2000 aircrafts ascended into the sky, welcoming Taiwan's president, and the head of Taiwan's military, back home.

She returned to the Presidential Office after issuing her remarks in order to listen to reports from the National Security Council and the Defence Ministry on the Navy mishap.

Just a day after the incident, Tsai's expression was solemn after descending from the plane, Central News Agency reported. Her speech afterward was succinct and to the point.

Taiwan was always on her mind when she was abroad, Tsai said, and she pointed out that during her trip overseas, challenges back at home never ceased to concern her. She went on to promise to Taiwanese nationals that the government would handle the aftermath of the incident with the most "responsible attitude."

On the topic of her state trip, Tsai stated that she held bilateral talks with seven heads of state and deputy heads from among Taiwan's diplomatic allies, as well as exchanged opinions with over 20 US congressional representatives.

Tsai also expressed gratitude toward Panamanian President Juan Carlos Varela for his invitation to attend the ceremony of the expanded Panama Canal on June 26.

In Paraguay, she met with President Horacio Cartes who shared the same ideals regarding the two country's resources and markets, with hopes the two nations could complement one another in strengthened beneficial co-operation.

Practical diplomacy, Tsai said, is what she believes to be the most useful diplomatic policy for Taiwan to employ in the future, and promised to continue with efforts to bring Taiwan recognition on the international stage.