TOKYO - The fate of Tokyo's famous Tsukiji fish market is finally coming into focus now that the city's governor, Yuriko Koike, has approved the historic venue's hotly contested relocation. The Nikkei has learned that Tokyo's plans for the site include building a temporary transportation depot for Olympic athletes during the 2020 games. Here is a recap of the relocation saga.

Q: Why is the Tsukiji fish market being relocated?

A: Tokyo decided in December 2001 to move the Tsukiji market, located along Tokyo Bay near the upscale Ginza shopping district, to the Toyosu waterfront district some 2km to the east. The over 80-year-old wholesale market is showing its age, and safety concerns due to structural damage have become an issue. The market has also become extremely crowded, impeding smooth operations.

Q: Why did Gov. Koike initially halt the relocation?

A: The market was originally slated to move in November 2016. But in August that year, soon after Koike was elected, she blocked the relocation, citing environmental concerns. The new site was once home to a coal-to-gas plant, and soil and groundwater samples from the site showed unsafe levels of such pollutants as benzene.

A panel of experts compiled a list of measures to improve the safety at Toyosu, including spreading special protective sheets in the space below the market building. After Koike signed off on the relocation earlier in June, she said in an interview with The Nikkei that she aims to relocate the market in May 2018. But some say that is unrealistically soon. 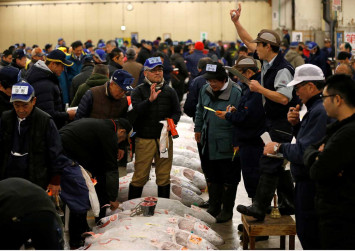 Q: What will happen to the current site?

A: The fish market is hugely popular among tourists, drawing crowds to its restaurants and famous early morning tuna auction. Tokyo plans to preserve the valuable Tsukiji "brand" by ensuring that the site remains a culinary centre. Koike said she intends to redevelop the site into a "food theme park" in five years. She also said some of its market functions will remain, though she has not elaborated on the details.