Five aircraft were left flying above a Makassar airport in South Sulawesi on Tuesday afternoon after cumulonimbus clouds surrounded the area, forming wave-like clouds that some said resembled a tsunami.

The aircraft stayed airborne for about 20 minutes as they waited to be cleared for landing at Sultan Hasanuddin International Airport. During that time, local air traffic control prevented them from touching down because the clouds were exceedingly dark and posed lightning risks.

The clouds caused panic among local residents who were still reeling from the Sunda Strait tsunami, which recently hit Banten and Lampung on Dec. 22, killing more than 400.

The neighbouring province of Central Sulawesi was also hit by a natural disaster recently when a strong earthquake triggered a tsunami that ravaged the Palu Bay on Sept. 28, killing more than 2,000. Recordings of the clouds were posted on social media by several people. "What sign is this??? Clouds in the form of ocean waves, makassar, south Sulawesi. [God] grant us patience and protect us from all these trials," said Twitter user @Nunuf4.

"On the first day of 2019, Makassar sky gives [a] beautiful 'show'. Clouds in the form of tsunami waves appear in the sky. But keep calm. Forecaster said it is a usual phenomenon and has occurred in other countries," commented another user, @P3nj3l4j4h.

"Cumulonimbus clouds are dangerous. These clouds can freeze plane engines because many ice particles are inside them. There is also lightning in them," he said as quoted by kompas.com on Wednesday. 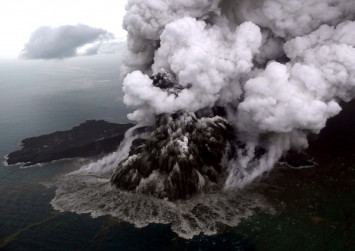 Novy said the airport's traffic control tower was prepared to deal with the clouds, as its radar could detect weather conditions within a radius of 100 kilometers and, as such, properly direct pilots.

He added that such thunderclouds usually occurred at a height between 1,000 to 15,000 feet and that planes normally flew at 30,000 to 40,000 feet, so the airplanes were basically safe so long as they maintained their height.

Nur Asia Utami, an official with the Meteorology, Climatology and Geophysics Agency's (BMKG) Makassar branch, said the cumulonimbus clouds on Tuesday were quite major.

"It's dangerous because they cause heavy rain with lightning and strong winds. They usually disappear within one to two hours," she said.

Nur said such clouds could occur along the western and southern coasts of South Sulawesi.

"It can occur in several parts of South Sulawesi. It could even reappear in Makassar again," she said.