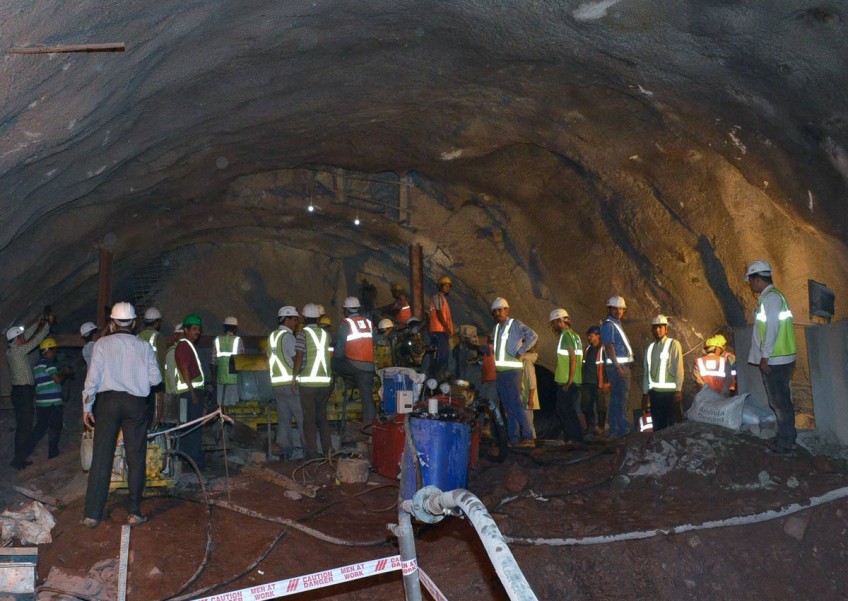 Indian rescue work is in progress at the tunnel site at Tihra village of Malyawar, in Bilaspur district, some 100 kms from Shimla in northern Himachal Pradesh state on Sep 17, 2015.
AFP

SHIMLA, India - Two labourers were finally rescued on Monday after surviving for almost nine days more than 40 metres underground in a collapsed tunnel in northern India.

Rescuers clapped, cheered and flashed V for victory signs as the dazed pair were brought to the surface in Himachal Pradesh state in the Himalayan foothills after a marathon rescue effort.

Named by local media as Mani Ram and Satish Tomar, the pair were taken to a local hospital but were not thought to be suffering from life-threatening injuries.

Rescuers were still searching for a third labourer feared trapped under debris when a cave-in blocked the entrance of the tunnel with tonnes of earth and boulders on September 12.

"Two of the three men have been rescued and the search is on for the third missing man. For us, the operation is not over," said Mansi Sahay, deputy commissioner of Bilaspur district where the accident occurred.

Using heavy machinery, engineers spent days drilling a shaft down to the tunnel, part of a highway construction project in Bilaspur, 110 kilometres (68 miles) from the state capital Shimla.

But their efforts were frustrated by a series of mechanical breakdowns and driving rain.

Dried fruit, glucose and water were dropped to the men midweek after engineers managed to drill a thin 47-metre (154-foot) shaft down to the tunnel's roof, according to local media.

A remote camera and microphone were also lowered on Saturday, allowing rescuers to speak to the two workers.

Rescuers from the National Disaster Response Force were finally lowered into the tunnel after the wider shaft was completed on Monday and deemed safe.

"It was a very risky and long operation as our rescuers were totally exposed to loose rocks," NDRF director general O.P Singh told the Press Trust of India news agency.

Deadly tunnel collapses and other accidents are common in India, mainly in the mining industry where safety conditions are often lax.