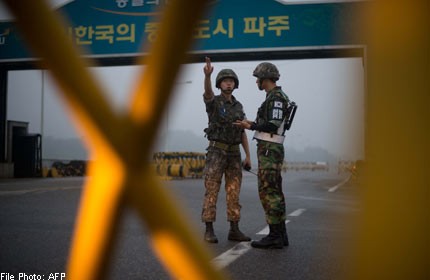 SEOUL - The two Koreas held fresh talks Wednesday on reopening a joint industrial park, ahead of South Korea-US military exercises next week that the North says are a rehearsal for war.

The two sides have already met for six rounds of fruitless discussions on the future of the park in Kaesong, which was effectively shut down by North Korea in April as military tensions soared on the divided peninsula.

With South Korea kicking off the annual military drill with the United States on Monday, the result of the latest negotiations could determine whether the peninsula is sucked into another dangerous cycle of escalating hostilities.

"We feel a tremendous responsibility going to the talks today," the South's chief delegate Kim Ki-Woong said before leaving Seoul for Kaesong, which lies 10 kilometres (six miles) inside the North Korean border.

"We will try our best to meet people's expectations," Kim said.

An association representing the owners of the 123 South Korean companies based in Kaesong said Tuesday that the time had come to make a lasting deal on resuming operations.

"This time, our government and the North's authorities must reach agreement on reopening Kaesong without fail," it said in a statement.

The North had proposed the seventh round of talks last week, just hours after Seoul announced it was going to start compensation payments totalling $250 million to businesses impacted by Kaesong's closure.

The payout move was widely seen as the first step towards a permanent withdrawal from the zone.

Established in 2004 as a rare symbol of inter-Korean cooperation, Kaesong was a key hard-currency earner for the North and the decision to shut it down took many observers by surprise.

The project had managed to ride out previous North-South crises without serious disruption, but it eventually fell victim to an extended period of heightened tension following the North's third nuclear test in February.

The North initially barred access to the park, and then withdrew its 53,000-strong workforce which had kept the South Korean firms running.

Wednesday's talks will be dominated by the same issue that deadlocked the previous six rounds: South Korea's demand that the North provide a binding guarantee not to close Kaesong again in the future.

"There have been signs that both sides really want to move forward this time, but the guarantee issue is still the main obstacle," said Yang Moo-Jin, a professor at the University of North Korean Studies in Seoul.

"If the talks collapse, we'll likely see a new cycle of tensions with the North using the coming military exercises to get the ball rolling," Yang said.

Although largely computer-simulated, it is viewed as highly provocative by North Korea, which has already issued dire warnings of its impact on stability on the peninsula.

"If the drill takes place, conditions in the region will become unpredictable and escalate to the brink of war," the North's ruling-party newspaper Rodong Sinmun said last month.

The North had cited similar joint exercises earlier this year as the primary trigger for Kaesong's closure.

If progress is made on Wednesday towards re-opening Kaesong, then Pyongyang may choose to tone down its criticism of next week's drill so as to avoid endangering a resumption of operations.

But some analysts argue that the North and its young leader Kim Jong-Un will look to stir up frictions whatever the outcome.

"The North Korean system's seemingly inherent need for instability - and the frustrations of its current situation - provide every reason to be on guard against new provocative actions," said Scott Snyder, senior fellow for Korean studies at the US-based Council on Foreign Relations.

"The bottom line: expect more nuclear and missile tests and/or other provocations sooner or later, because Kim Jong-Un's legitimacy and his prospects for survival may depend upon it," Snyder wrote.