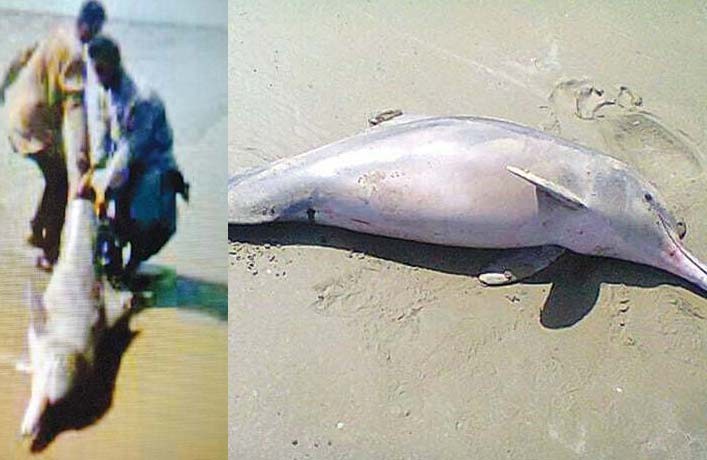 The stranded dolphin(left) being pushed back into the water.

KARACHI, Pakistan - A dolphin that beached in the Sonmiani area of Balochistan was rescued and helped swim back to the sea on Tuesday.

The species identified as an Indo-Pacific humpback dolphin was about 5.5 feet long. It's a near threatened species, according to the International Union for Conservation of Nature Red List.

"The incident took place at a distant place in Miani Hor (a swampy lagoon near the coast of Lasbela district). The stranded dolphin was rescued by Naseer Ahmad and Tahseen, two fishermen who were returning from a fishing trip when they noticed the species," said Mohammad Moazzam Khan working as a technical adviser on marine resources with the World Wide Fund for Nature-Pakistan (WWF-P).

They initially thought that the dolphin was dead but it was alive when they had a closer look, he added while quoting the fishermen.

"They are trained in rescuing stranded marine species by the WWF-P and the Sonmiani Development Organisation (SDO). After releasing the dolphin back into the sea, they both remained in the area for about an hour, just to ensure that the dolphin swim into the offshore waters," he said.

The Indo-pacific humpback dolphin (Sousa chinensis), he said, was a coastal species found in shallow waters as well as in creek systems and lagoons.

"It faces serious threats in Pakistan due to degradation of habitat, pollution and entanglement in fishing nets. Previously, a resident population of the dolphin was found within the Karachi port but it is no longer seen in the area. We must appreciate dolphin rescue efforts on part of the communities," he said.

The SDO, he pointed out, had successfully implemented a project titled Marine Dolphin Conservation through Community Education and Capacity Building in collaboration with the WWF-P. Under the project funded by the Ocean Park Conservation Foundation, Hong Kong, a number of fishermen have been trained to rescue entangled dolphins and other endangered marine animals.

According to Master Abdul Rasheed, SDO coordinator, about 30 fishermen have so far been trained to rescue endangered marine species and collect information about the population of dolphins residing in the coastal area.

"A study carried out with the assistance of the WWF-P has shown that about 80 dolphins resided in the Miani Hor lagoon whereas a similar population exists in the coastal waters of Sonmiani Bay," he said.

The fishermen and communities of the coastal area of Miani Hor, he said, had been educated on the importance and conservation of dolphins, whales and turtles that were earlier got unnecessarily killed due to ignorance.

The secretary of the Coastal Association for Research and Development, a local community-based organisation in the area, Abdul Qayyum lauded fishermen's efforts in rescuing the dolphin and said that it's great achievement that communities now wanted to preserve the diversity of the marine ecosystem.

Kalimullah Mirbahar representing the Balochistan Mahigiri Network said that fishermen of the coastal areas of Sindh and Balochistan were "conservationists" by nature who struggled hard to save protected species.

In March 2009, about 250 pantropical spotted dolphins were beached in Gaddani. Almost all were rescued and safely released back into the sea with the help of coastal communities. Last month, an observer working for WWF-P residing in Kakapir village rescued an Arabian common dolphin (Delphinus capensis tropicalis) in the Sandspit area.