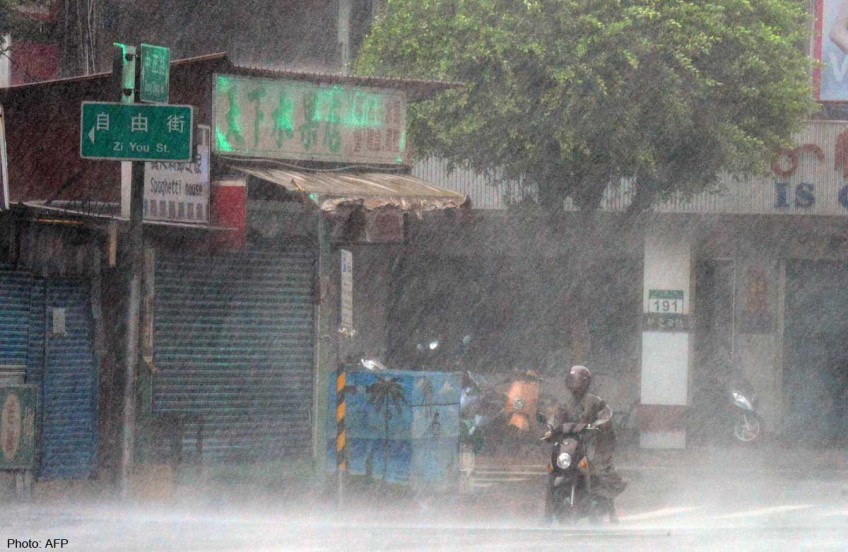 According to the Central Weather Bureau (CWB), the land warning was lifted at around 5 p.m. and Matmo continued to move toward mainland China's Fujian province.

The CEOC said that a falling sign hit a 58-year-old man in Tainan City yesterday morning and a 52-year-old woman was injured when a tree collapsed on the same road in Tainan City. Both victims suffered from minor injuries, according the CEOC.

A taxi driver was hit by a tree when driving through Shilin District, the CEOC said, while a 68-year-old man fell off his bicycle after being hit by strong wind; both were sent to nearby hospitals for medical treatment.

The CEOC said that three people died from accidents during the time period when Matmo impacted Taiwan, but local governments did not include those cases as typhoon-related accidents.

According to the CWB, after Typhoon Matmo gradually moves away from Taiwan, southwesterly winds will likely bring heavy rain to the central and southern parts of Taiwan, especially in mountainous areas.

The CWB said that as of 4 p.m. on Wednesday, the accumulated precipitation in many towns in the east and southern parts of Taiwan already had reached 400 mm.

The Directorate General of Highways (DGH) yesterday said that landslides, fallen rocks and road collapses were seen on sections of highways in Yilan and Hualien.

According to the DGH, sections of the Suhua Highway that connects Suao and Hualien collapsed and some parts of it were covered by fallen rocks and trees. The DGH said that workers have been fixing the highway in order to allow traffic to pass through the area.

The DGH said that the Alishan Highway that was closed down in order to ensure the safety of drivers and passengers is scheduled to be reopened for traffic by 7 a.m. today.

The three major centers of vegetable and fruit production, namely Yunlin, Chiayi and Changhua, did not suffer severe damage from the strong wind and heavy rain brought by Typhoon Matmo, the Council of Agricultural (COA) said yesterday.

According to the Yilan County Government, the agricultural damage in the county was estimated at about NT$44 million.

CNN yesterday quoted storm chaser James Reynolds who said that Taiwan has solid infrastructure that can survive the strong winds brought by storms like Typhoon Matmo.

According to Reynolds, the damage brought by Matmo to structures still requires further evaluation.

Reynolds said that he saw many fallen trees and rocks as he travelled down the East Coast yesterday.