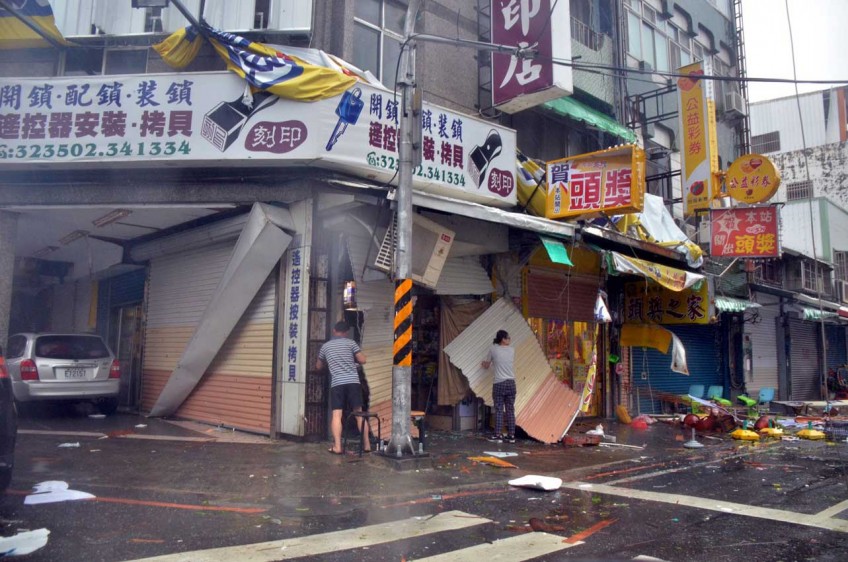 A man and a woman are seen amongst debris in front of a shop with broken shutters, towrn away by strong winds of Typhoon Nepartak in Taitung on July 8, 2016.
AFP

TAIPEI, Taiwan - Typhoon Nepartak moved out into the Taiwan Strait from Jiangchun District of Tainan City in Southern Taiwan at 2:30 p.m., Friday after leaving three dead and 142 injured and 1,836 cases of trees and signboards falling and other damage, according to data issued by the Central Weather Bureau (CWB) and the Central Emergency Operation Center (CEOC).

CWB forecasters said that Taiwan proper will totally exit the storm circle of Nepartak early Saturday, but the outlying islands will remain under the influence of the typhoon until Saturday evening. They advised people to stay on the alert for continuing strong winds and heavy rains brought by the storm.

The first typhoon of the 2016 Pacific typhoon season made landfall in Southeastern Taiwan's Taitung County at 5:50 a.m. Friday, pummeling much of Taiwan with strong gusts and heavy rains but with Taitung bearing the brunt of the storm, with many houses damaged, and low-lying areas flooded in the county amid the strongest winds to hit the county in 61 years.

According to the CEOC, damage was reported in the southern city of Tainan, the northeastern county of Yilan, and the eastern counties of Hualien and Taitung, as well as Lienchiang County of Fujian Province.

On Thursday noon, a man was reported drowned near the Chihsingtan Beach, a top tourist attraction in Hualien County and was pronounced dead after being rushed to a nearby hospital. Meanwhile, a solider was found dead after going missing while fishing on the coast of Dongyin Islet of Lienchiang County. He was reported to have been washed out to the sea by the strong winds.

Most Injuries Reported in Taitung County

The majority of the injuries were reported in Taitung County, - a total of 132 - most due to falling glass or falling on the streets, said officials at the Taitung branch of Mackay Memorial Hospital. The hospital activated emergency measures to take care of the wounded, most of whom had sustained injuries to the head and limbs.

CWB forecasters said that as of 6 p.m. Friday, Nepartak was centred some 50 kilometers southeast of Penghu Island, Taiwan, moving at a speed of 14 kilometers per hour (kph) in a northwesterly direction. With a radius of 200 km, the storm was packing maximum sustained winds of 144 kph, with gusts reaching 180 kph, the same data indicated.

CWB forecaster Chen Li-liang said that although the wind and rain had eased, some mountainous areas in Southern Taiwan, such as Taiwu and Laiyi townships of Pingtung County and Xiaokang of Kaohsiung, were bombarded with heavy downpours for several hours Friday morning. Chen said heavy rains are expected to last into next Monday or Tuesday in mountainous areas in Kaohsiung and Pingtung amid the lingering southwest airflow.

Winds and rains were not as strong and heavy as expected in Northern Taiwan, due mainly to the fact that Nepartak veered southward.