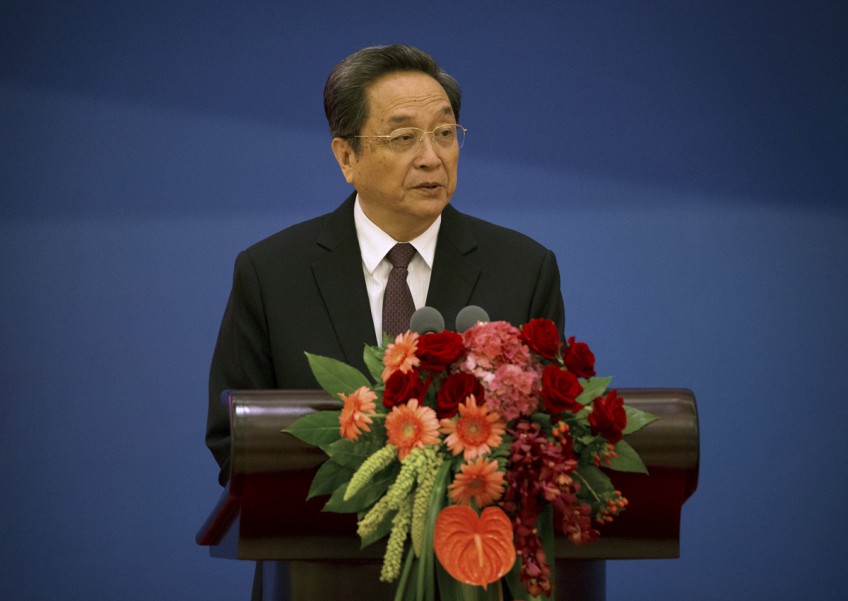 Mr Yu Zhengsheng, the fourth most senior member of China's Communist Party, said heavy handed pressure must be maintained to safeguard peace in the region.
Reuters

BEIJING - China will maintain "heavy pressure" to defeat militants in its far western region of Xinjiang, China's fourth most senior leader said during a visit to its ethnic Uighur heartland, urging religious figures to take the lead in opposing extremism.

The government says it faces a serious threat from Islamist militants and separatists in energy-rich Xinjiang, which sits strategically on the borders of central Asia and where hundreds have died in violence in recent years.

However, exiles and rights groups say China has never presented convincing evidence of the existence of a cohesive militant group fighting the government, and that much of the unrest can be traced back to frustration at controls over the culture and religion of the Uighur people who live in Xinjiang.

Visiting the old Silk Road city of Kashgar, deep in southern Xinjiang, Yu Zhengsheng said long-term stability must be the main goal for the region, the Xinjiang government said on its official news website on Sunday.

"From beginning to end maintain heavy-handed pressure, and resolutely safeguard the people's peaceful life," Yu, who is in charge of religious groups and ethnic minorities and number four in the ruling Communist Party, told officials on his one-day visit on Saturday.

Speaking later with soldiers, Yu said southern Xinjiang was the "main battle ground in the anti-separatist struggle", urging them to be a "staunch force" in protecting stability.

Yu met with "patriotic religious figures" and told them they had an important role to play defeating extremism in southern Xinjiang, the government said.

"Religious figures should be brave enough to declare their stand at critical moments and continue taking a leading role in opposing extremism and promoting unity of various ethnic groups," Yu said.

The website showed a picture of a smiling Yu chatting to turbaned and bearded Uighurs in the mosque, who all appeared to be dutifully listening to his remarks.

China is gearing up to mark 60 years since its established what it calls the Xinjiang Autonomous Region.