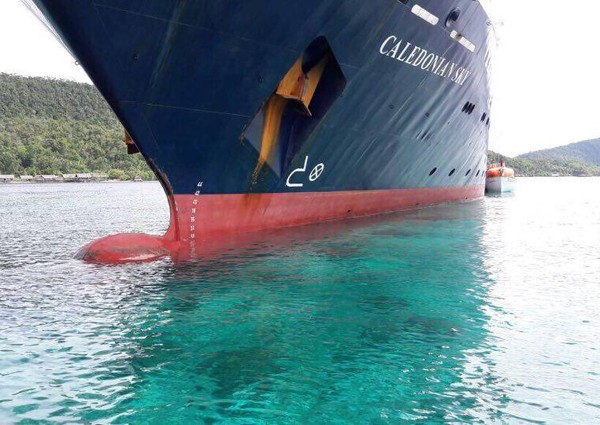 SORONG, INDONESIA - A British-owned cruise ship has smashed into and damaged pristine coral reefs in a remote corner of Indonesia known as one of the world's most biodiverse marine habitats, researchers and officials said Tuesday.

Raja Ampat in eastern Indonesia has long been a top attraction for intrepid travellers and avid divers, home to palm-fringed islands surrounded by an underwater kaleidoscope of coral and fish.

But the 4,200-ton Caledonian Sky slammed into the reefs at low tide around Kri, one of hundreds of small islands in Raja Ampat, earlier this month after taking the tourists aboard on a bird-watching expedition.

The boat, which was carrying 102 passengers and 79 crew, became grounded on the reefs and had to be refloated by a tug boat before continuing on its journey.

The accident has damaged an estimated 13,500 square metres (145,000 square feet) of coral reef which could cost up to $16.2 million to restore, according to Ricardo Tapilatu, a marine researcher from the University of Papua who headed a team assessing the impact.

There has been outrage in the local tourism industry which relies on Raja Ampat's natural wonders for its survival.

"How can this happen? Was a 12-year-old at the wheel?" Stay Raja Ampat, a website that links tourists up with homestays, said on its Facebook page.

"Anchor damage from ships like these is bad enough, but actually grounding a ship on a reef takes it to a whole new level." Head of Raja Ampat's tourism agency Yusdi Lamatenggo confirmed the accident, which took place on March 4.

Environmental group Conservation International said that the Bahamas-flagged ship had gone into an area that it should not have entered due to the unique coral reefs.

"This is a very, very big loss for us," Victor Nikijuluw, the marine programme director at Conservational International Indonesia, told AFP.

The ship's operator, Britain-based tour company Noble Caledonia, said in a statement to the Jakarta Post newspaper that it is "firmly committed to the protection of the environment and as such deeply regrets any damage caused to the reef".

The Indonesian government said it was assessing the damage and would seek compensation from the operator.

The remote archipelago of Raja Ampat - which means Four Kingdoms in Indonesian - lies between the Pacific and Indian oceans. A 2002 report from Conservation International said it was home to nearly 1,400 varieties of fish and 603 species of coral.