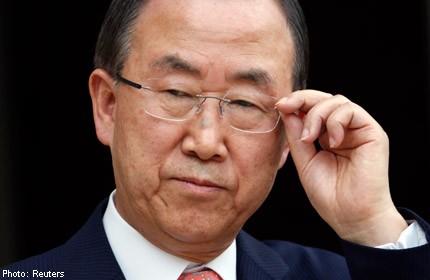 UNITED NATIONS - UN Secretary-General Ban Ki-moon appealed on Thursday for funding to urgently provide food, healthcare and sanitation to millions of North Koreans, stressing that donors should not be deterred by the reclusive state's nuclear ambitions.

The United Nations said it needs almost US$100 million (S$127 million) to fund aid programs for the rest of 2013 in North Korea, where there are about 2.4 million very vulnerable people in need of regular food assistance. The world body said almost a third of children under age 5 in North Korea suffer chronic malnutrition.

"The lives of many people are at stake, including children who are vulnerable to lasting suffering if they do not receive aid," Ban's press office said in a statement.

"The secretary-general calls on prospective donors to respond to this serious situation. He stresses that humanitarian assistance should not be linked to political or security considerations," it said.

North Korea is under a sweeping array of UN, US and other national sanctions due to repeated nuclear and ballistic missile tests since 2006 in defiance of international demands that it stop.