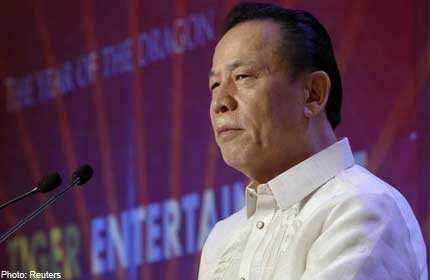 TOKYO/SAN FRANCISCO - A director of Universal Entertainment Corp altered minutes of a meeting of executives at the Japanese gaming machine maker to show they had approved a $25 million (S$32million) payment that is under US investigation as possible bribery, a report commissioned by the company says.

The report says that around October 2012 Hajime Tokuda altered minutes of a November 2009 meeting to show a decision to make the $25 million payment was made by a board of executive officers.

The original minutes made no mention of the payment, according to copies of the report and the minutes seen by Reuters. The minutes were listed as an attachment to the report, which was completed on June 21 this year.

Tokuda was concerned that a lack of documentation showing the company's official decision-making body had authorised the payment would be discovered in the course of litigation between billionaire Universal founder Kazuo Okada and Wynn Resorts , the report says.

Tokuda, who was president of Universal at the time of the payment and who has been working closely with Okada and the board in responding to the Wynn suit and the bribery allegations, "feared that it would be detected. This led him to altering the minutes after the fact," the report says.

The report was compiled by a former high-ranking police official and two lawyers in Japan who were hired by Universal to investigate a total of $40 million in payments in 2010 to a politically connected consultant around the time the company lobbied for concessions for the planned casino resort.

Last month, Universal released a summary of the report, which concluded that there was no evidence to support allegations of bribery. It was critical of the company's governance though, blaming a lack of oversight of its overseas operations for allowing payments to be made in error.

The summary version of the report also said the minutes of the November 24, 2009 meeting had been altered but it did not disclose details such as who created the document and when it was written.

The authors of the report - Yoshiyuki Kaneshige, a former police agency official who now heads a management consultancy, and attorneys Teruki Uchida and Takujiro Hamada - did not return calls seeking comment.

In the report, the authors said their findings were based on incomplete information, noting that they had yet to speak to key people involved in moving the money. Universal said last month a second committee would be convened to investigate further.

By October 2012, when the report says Tokuda altered the minutes, the US Federal Bureau of Investigation and the state gaming regulator in Nevada, where Universal has a gaming licence, had begun to investigate the $25 million as part of $40 million in payments the company made to the consultant, Rodolfo Soriano.

"It raises a lot of questions here," said Nicholas Benes, a corporate governance expert and head of the Board Director Training Institute of Japan, referring to the existence of altered minutes. "What makes you wake up three years later and decide you need to change documentation of this meeting?"

Universal has provided the unabridged report to the Osaka Securities Exchange, part of the Japan Exchange Group which oversees Universal's stock listing, a person familiar with the matter said. A spokesman for the Japan exchange declined to comment.

The Nevada Gaming Control Board confirmed it had received the report. "We do have that report. It's another piece that we will have to review," board chairman A.G. Burnett said. "I don't have any comment on the substance."

Universal filed lawsuits last year against three former employees, claiming they transmitted $15 million of the $40 million without authorisation. Universal told Reuters in March the $25 million payment had been made in error and that it did not know how the money was ultimately used.

The company has said management was misled into believing there was a need to pay $25 million to acquire lots of land reserved for road use where it is building the casino, unaware the "road lots" had been obtained for free in an agreement signed by a Philippine subsidiary on November 27, 2009.

The first set of minutes of the November 24, 2009 executive meeting makes no mention of a payment or the road lot issue.

The second set, which the report says was created by Tokuda in 2012, lists a 2.5 billion yen payment - approximately $25 million - for road lots as a matter to be resolved by the executive officers. Both sets are listed as attachments in the report.

The minutes that the report says were altered carry the personal seals of six of eight attendees including Tokuda, current Universal President Jun Fujimoto and Masayuki Sano, head of legal affairs. The document is missing the seals of two executive officers who are no longer with the company.

Personal seals are a common way for corporate executives to officially approve important documents in Japan. Universal declined to make Fujimoto or Sano available for comment.

The report did not address whether Fujimoto, Sano and the other officers whose seals were on the document had approved the creation of new minutes in 2012.

The authors say the evidence they gathered suggested a resolution to make the payment was made at a separate meeting of executives attended by Okada, Soriano and others in early December 2009 two days before the money was sent.

The FBI is involved because the money originated from a US-based Universal subsidiary. The US Department of Justice said in April that Universal was the target of a criminal investigation for possible bribery.

Universal, which sells slot machines to casinos in the United States, announced a day before its annual meeting in June that Tokuda would not be a candidate for the board because of unspecified personal reasons.