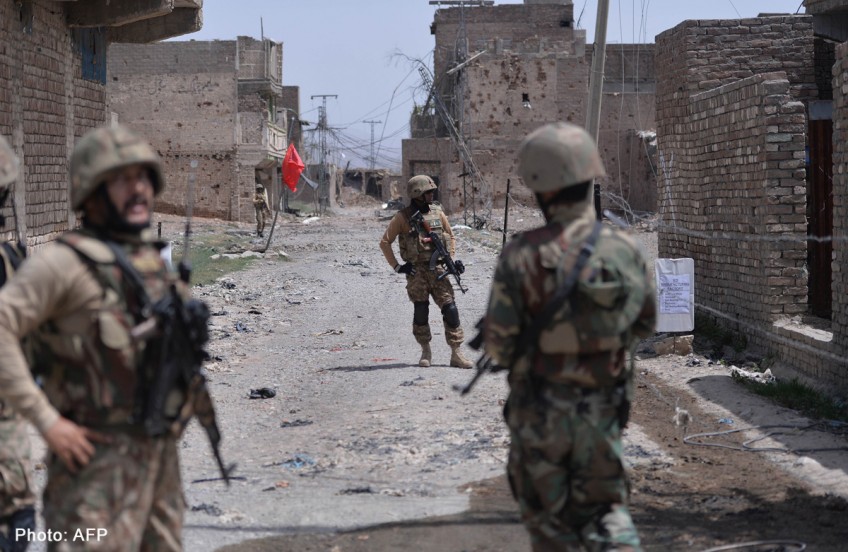 Pakistani soldiers patrol during a military operation against Taliban militants in the main town of Miranshah in North Waziristan.

The strike was aimed the stronghold of prominent warlord Hafiz Gul Bahadur, as well as the nearby base of an Uzbek commander in North Waziristan, one of seven semi-autonomous tribal districts that border Afghanistan.

"A US drone fired two missiles which hit a compound and a vehicle in Alwara Mandi of North Waziristan...killing six terrorists," a senior security official told AFP, speaking on condition of anonymity.

The area has been a hub for Al-Qaeda and Taliban militants since the early 2000s.

Another security official confirmed the strike and casualties.

The area is generally off-limits to journalists, making it difficult to independently verify the number and identity of the dead.

Washington pressed Islamabad for years to wipe out militant sanctuaries in North Waziristan, which have been used to launch attacks on NATO forces in Afghanistan.

The Pakistani military launched a major offensive in the area in June and says it has killed more than 1,700 militants so far, with 126 soldiers having lost their lives.

Bahadur, once seen as "pro-Pakistani", is unhappy with the military offensive in North Waziristan.

He is aligned with the feared Haqqani network, which is frequently accused of sending fighters and suicide bombers against US and NATO troops in neighbouring Afghanistan.

The latest strikes came after Pakistan ramped up its anti-terror strategy in the wake of a Dec 16 attack on an army-run school in Peshawar which killed 150 people, 134 of them children.

Prime Minister Nawaz Sharif has announced the establishment of military courts for terror-related cases in order to accelerate trials, and the premier has also lifted a six-year moratorium on the death penalty, reinstating it for terrorism-related cases.