US puts Sri Lanka on notice over alleged war crimes 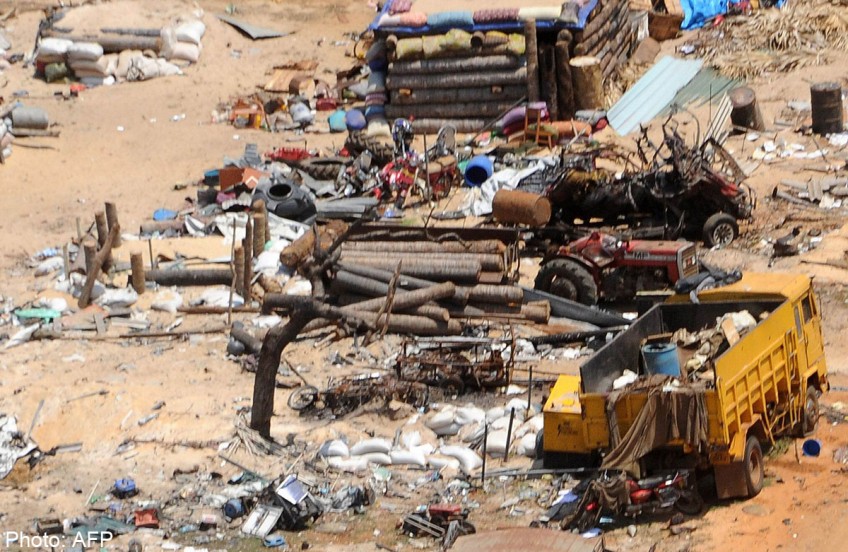 A general view of the abandoned 'conflict zone' where Tamil Tigers separatists made their last stand before defeat by the Sri Lankan army.

COLOMBO - A US-led resolution calling for an international probe into allegations that 40,000 civilians were killed at the end of Sri Lanka's separatist war has been filed with the UN's top rights body.

In a draft resolution posted on the Human Rights Council's website on Tuesday, the United States endorses UN human rights chief Navi Pillay's call for an external investigation into alleged war crimes in the final stages of Sri Lanka's Tamil civil war in May 2009.

The draft welcomed Pillay's recommendation following her visit to Sri Lanka in August that there should be an "independent and credible investigation in the absence of a credible national process with tangible results".

International rights groups as well as UN experts have said there are "credible allegations" that up to 40,000 Tamil civilians were killed after government forces ordered them into a no-fire zone.

The resolution noted progress in de-mining, reconstruction and re-settling war victims and effectively gave Sri Lanka another year to show results on accountability.

The draft was backed by Britain, Montenegro, Macedonia and Mauritius.

In Colombo, dozens of pro-government Buddhist monks staged a protest against the resolution on Tuesday, marching through the streets of the capital to UN offices.

The resolution is "totally based on information of questionable veracity", the monks said in a petition to UN Secretary General Ban Ki-moon handed to staff at the Colombo offices.

On Monday, the UN leader also endorsed Pillay's report on Sri Lanka, whose government has rejected all calls for an international investigation into the allegations.

The US-led resolution asks Pillay to report back on progress with an oral submission to the UN Human Rights Council in March next year, and provide a written report by September 2015.

The draft also called on Sri Lanka to investigate allegations of military excesses and expressed "serious concern" over continuing reports of human rights violations five years after the end of the decades-long separatist war.

It said that "sexual and gender-based violence, enforced disappearances, extrajudicial killings, torture and violations of the rights to freedom of expression" were continuing in Sri Lanka.

The UN rights council in Geneva is expected to vote on March 28 on the resolution, the third in as many years against Colombo.

Sri Lanka has already rejected Pillay's call for an international probe as an "unwarranted interference", and President Mahinda Rajapakse has accused Washington of treating Colombo like Muhammad Ali's "punching bag".

At least 100,000 people were killed in the 37-year battle for a separate homeland for ethnic minority Tamils before Rajapakse's troops crushed the Tamil Tiger rebels.