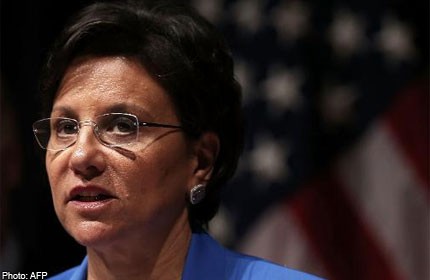 NUSA DUA - The US government warned Sunday that business in America was suffering from the federal shutdown as concern about Washington's policy paralysis was voiced at an Asia-Pacific summit where President Barack Obama was a notable absentee.

The first government closure in 17 years has directly affected hundreds of thousands of federal employees, but Commerce Secretary Penny Pritzker said companies were also starting to hurt, not least from her department's inability to collate vital economic data.

"The shutdown is not good for business. It's not good for the economy," Pritzker told reporters at the Asia-Pacific Economic Cooperation (APEC) forum on the Indonesian island of Bali, which Obama has been forced to skip to deal with the political crisis gripping Washington.

"And we need to move on with the business of doing business in the United States. So, I am hopeful this gets resolved soon. It's obviously having an impact," Pritzker said.

Her remarks on the economic impact came after Secretary of State John Kerry warned at the APEC meetings on Saturday that the standoff was "reckless", and would weaken America's diplomatic standing abroad if it did not end soon.

Apart from APEC, Obama is also missing a separate East Asian summit this week and scheduled trips to Malaysia and the Philippines. His failure to come coincides with a diplomatic push by China in Southeast Asia featuring high-profile visits by President Xi Jinping, who is at APEC.

Speaking at a Bali meeting of APEC business leaders which Obama had also been scheduled to address, Singapore Prime Minister Lee Hsien Loong said the president's no-show was "a very big disappointment to us".

"Obviously we prefer a US government that is working to one that is not. And we prefer a US president who is able to travel and fulfil his international duties to one who is preoccupied with national domestic preoccupations," he said.

While expressing sympathy for Obama's domestic travails, Lee said "no other country can replace" US engagement in Asia.

"Not China, not Japan, not any other power. That is something which we continue and encourage at every opportunity."

At the same APEC business gathering, Chilean President Sebastian Pinera said the United States had to confront its fiscal problems "in a better way than they are doing it now with shutting down the government".

Philippine President Benigno Aquino, who will now play host in Manila to Secretary of State John Kerry instead of Obama, proffered understanding for the president's decision to stay home by underscoring the gravity of the situation.

"The US economy is the number one economy in the world, what happens there affects all of us," he said in Bali.

"The world economy obviously is not in a position to withstand too much shock at this time when we are just recovering as a global economy. We perfectly sympathise," Aquino added.

The US government closed all but its essential operations on Tuesday when Republican lawmakers refused to approve money for government operations without first delaying or defunding a new health care law commonly known as Obamacare.

Obama is refusing to negotiate with the Republicans over the budget issues until they pass a temporary bill to reopen the government.

He said they must also agree to raise the $16.7 trillion US statutory borrowing limit - without which Washington could default on its debts for the first time ever starting on October 17. For many abroad, that is a far bigger cause for fear than the present shutdown.

Pritzker said one big problem arising from the shutdown was US businesses could no longer access vital data about the economy that is normally posted on the commerce department's website.

The website has been taken offline because staff who run it are not working, and some analysts fret that the Federal Reserve is effectively blind to ongoing developments at a vital time of debate about when to wind down its post-crisis stimulus policies.

"We're a huge source of data for American business and that is a problem... It's affecting businesses and it's affecting their ability to get data," the commerce secretary said.