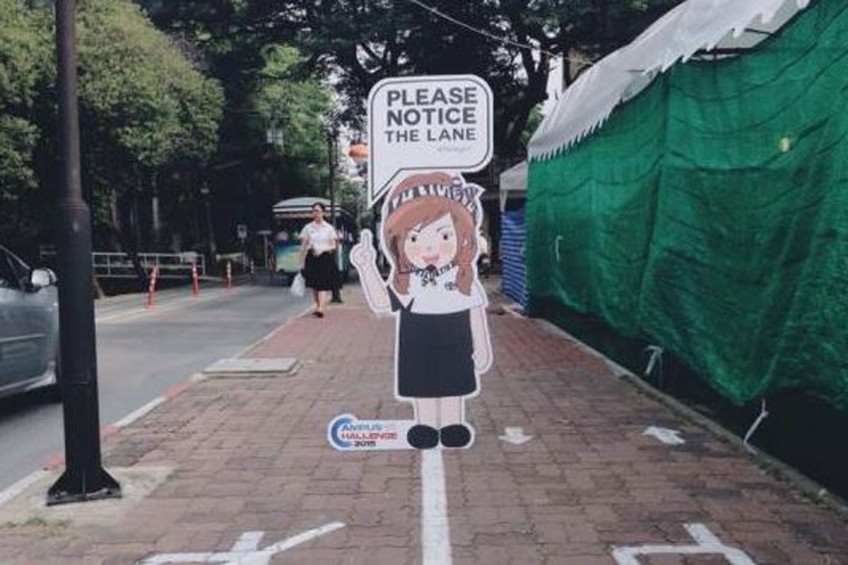 The 500-metre footpath was divided into two lanes to separate phone users from non-users. The initiative, proposed by KU students and sponsored by Toyota Thailand, was implemented on a trial basis until November 15 in front of Central |Building No 1, which has a lot of foot traffic during rush hour. The results of the initiative will be assessed by the Performance Management Strategies team to compare the numbers from before and after the dual-lane footpath was implemented.

During the morning rush-hour period, many students are in a hur-ry to attend classes and their path |is blocked by others who text and talk on their cellphones, said Natdanai Adisornpunkul, a third-year marketing major at KU's Business Administration Faculty. Rushing students resort to walking on the road to get to where they |are going, which is dangerous, he said.

It was submitted to the Toyota Challenge 2015, which invited university students to come up with marketing ideas to solve on-campus problems.

"We need to promote this scheme, which was only set up on Sunday, because many people are still unaware of it," he said, adding that they would spend a week to observe people's feedback.

"As people nowadays spend so much time looking at their mobile phone screens, they could get hurt if they are unaware of their surroundings. This project will help to boost public safety, while encouraging people to adhere to traffic regulations," he added.

Nutpapat Jarupan, a fourth-year tourism major, said she thought the scheme, which she heard about from peers, was so interesting that she tried using it. She said more public relations should be done to achieve the plan's goals.

Wimonrut Cheeramok, another fourth-year tourism major, said she tried walking on the lane yesterday and noticed that many students were unaware of it.

"I think KU should promote it and inform to students more to boost the scheme's effectiveness," she added.

Pasorn Saowaratthitada, Toyota Thailand's PR officer, said that if the project wins the contest, it would be recommended to Kasetsart University, which would then decide if the scheme can be permanently implemented.

Last September, China's Chongqing City made headlines with a light-hearted plan to set up a "mobile phone lane" for pedestrians on the footpath of a short section of the downtown road for people with smartphones. The initiative was apparently inspired by a US model in which a similar dual-lane arrangement was created in Washington, DC, in last July as part of a televised behavioural experiment.