The faulty memory of lottery ticket vendor in Kanchanaburi led to a conspiracy to cheat the true winner of the Bt30 million prize money, a source from the Crime Suppression Division (CSD) investigative team said on Tuesday.

The source said that retired policeman Charoon Wimul, 62, is the true winner and teacher Preecha Kraikruan, 50, had allegedly conspired with the lottery vendor to make a false complaint with Kanchanaburi police.

The disputed winning lottery tickets carried the number of 533726 in the November 1 draw. 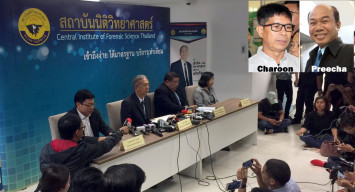 The CSD team found that three five-ticket sets with the last three digits of 726 were sold at the Red City Market, the source said.

The CSD team found that the first set, that did not have the first three digits 533, was bought by a man identified as Acharn Daeng.

The second set, that also did not have the first three digits 533, was sold by a vendor who regularly sells to Preecha.

The third set, with the complete six-digit winning numbers, was bought and sold by a different vendor, the source added.

However, the vendor that sold the second non-winning set of tickets thought that she had sold the winning tickets but she could not remember who she sold it to.

She first called Acharn Daeng who told her he did not have the winning numbers and then she called Preecha, and mistakenly told him that he had won the first prize.

“Then one thing led to another,” the source said.

Police initially concluded that Preecha was the true winner but the case was later taken over by the CSD, which released evidence that indicated otherwise.