The Hong Kong dog found to be infected with the coronavirus likely did not die from it, a medical source has told the Post, pointing out the Pomeranian in question was both old and suffering from underlying illnesses.

But news of the dog's "weak positive" infection, the first reported for a pet, has gone viral to the degree that one animal concern group fears it could be responsible for a jump in the number of abandoned dogs.

The 17-year-old pet, which belonged to a now-recovered Covid-19 patient, had been under mandatory quarantine at a government facility since February 26, before being returned home on Saturday.

Three days later, the owner reported its death to authorities. While the owner declined to allow an autopsy, questions were immediately raised as to whether the virus had caused the dog's death.

One medical source familiar with the case told the Post that was very unlikely.

"The dog did not develop any new symptoms after getting the virus [as it is just weakly positive]," the source said. "It is very unlikely the virus had any contribution to the death of the dog."

The dog was also considered "very old" and had other underlying illnesses, the source added. Pomeranians typically live only 12 to 16 years.

The dog was tested repeatedly during its quarantine. A total of five nasal and oral samples all returned "weak positive" results for the virus.

It was not until the final two tests - carried out on March 12 and 13 - returned negative that the department allowed it to leave the centre.

"The animal was allowed to leave the quarantine centre because the test results were negative," the source said. "But further investigations on the antibody results are ongoing."

The animal was tested for antibodies related to Covid-19, that would be able to prove an infection.

In a reply to the Post, a spokesman for the Agriculture, Fisheries and Conservation Department said: "The owner expressed that she did not wish for her dog to undergo postmortem to confirm its cause of death.

"The concerned dog is geriatric and has chronic illness. The dog did not show any sign of disease related to Covid-19 upon its return to the owner," the spokesman added.

The team at the University of Hong Kong's school of public health said they had hoped to follow up on the dog's condition after its release "but unfortunately we understand that the dog has passed away after returning to the owner's home and no further follow-up is possible".

"It is possible that with the ongoing Covid-19 epidemic, there may be more samples from dogs for analysis and we will have a better idea of the effect of coronavirus on dogs," said Professor Malik Peiris, a clinical and public health virologist at HKU.

Peiris confirmed the dog earlier had an "active infection" of the coronavirus, as it returned numerous positive tests over a period of 12 days after being removed from the infected patient's house.

"What is meant by 'weakly positive' is that the test had detected low quantities of virus from the specimens collected from the dog," he added. 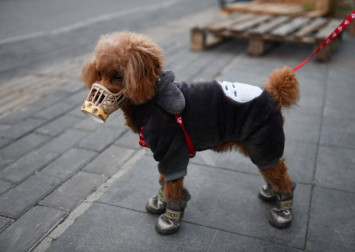 "To put it into perspective, a similar result in a human patient would be clearly regarded as diagnostic of Covid-19 infection," he said. "The low virus quantity may, however, be relevant when you consider how infectious the dog is to other dogs or humans. But in reality, we do not know how infectious the dog may be, purely from this result."

The owner, a 60-year-old woman, was confirmed to be infected and hospitalised on February 25. She recovered and returned home on March 8. Some of the woman's close contacts were also confirmed to have the coronavirus.

Animal concern groups, including Paws Guardian, are worried the case has led to an increase in the number of abandoned animals in the city.

"Earlier this month, we saw an increase in the abandonment of tiny dogs like schnauzers and Shih Tzu, from once a week to six, which we seldom see," Paws Guardian founder Kent Luk Ka-jeep said.

"The owners could hardly explain the reasons. They just say they no longer want to keep it. We are quite worried that the number would increase in the near future."

The AFCD has previously said there is no evidence that pet animals could be a source of infection.