A video released by the police to refute public criticism of a female police officer's handling of violence has proved counterproductive, as more criticism has emerged, this time citing the video.

On Wednesday, a shorter version of the video uploaded online by a citizen had sparked a heated debate about the female officer's handling of the drunk men, with some calling her approach overly passive.

In the full-length video posted on the station's website, the female officer is seen getting hit and pushed as she tries to help her colleague subdue another drunk man. 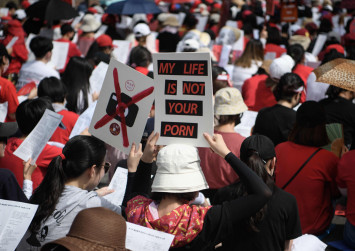 The Guro Police Station said, "The female officer subdued the assaulter by pressing him under her knees, so her actions cannot be considered 'passive' as accused by some online users. The two men have been arrested for obstruction of justice."

Many online comments, however, took issue with the policewoman. While trying to control the men, she is seen asking for help from a crowd, desperately shouting for "a male person" to come and help her.

In a section of the video in which only the sound is audible, an unidentified male voice asks the policewoman whether the drunk man should be handcuffed.