A video showing a hit-and-run incident between a car and a motorcycle at an overpass in Manahan, Surakarta, Central Java has gone viral.

The video, which was uploaded on Wednesday on Instagram account @iks_infokaresidenansolo had garnered more than 107,000 views and more than 3,000 comments at the time of writing.

In the video, a car is seen speeding from the South and the motorcycle from the West. The two are then seen colliding at a bend in the road.

After the collision, the car stopped for a while, but then sped up leaving the motorcycle rider on the road. 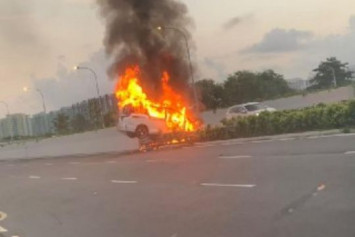 "The victim broke her right leg," he said on Thursday as quoted by kompas.com. The victim, identified as Retnoning, 54, a resident of Salembaran, Serengan, Surakarta, was treated at Kasih Ibu Hospital on Jl. Slamet Riyadi. However, she died the next day.

Bambang said the car driver, who left Retnoning on the side of the road after the incident, was still at large. The investigation to find the car driver is still on going. The police are checking the CCTV footage of the incident.