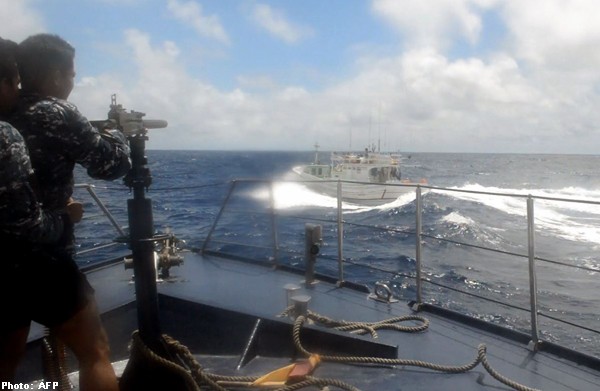 This video grab taken from a video released by the Philippines' National Bureau of Investigation (NBI) allegedly shows Philippine coastguard personnel pointing a machine gun at a Taiwanese fishing boat in disputed waters.

MANILA - A Philippine coastguard is seen laughing while trying to fire a rifle at a fleeing Taiwanese fishing boat, in a video of the incident that left one man dead and sparked a major diplomatic row.

In the 40-minute video, coastguard officers can be seen firing M-14 rifles and a mounted automatic machine gun at the vessel when it is a few hundred metres away and trying to escape.

The video was taken by one of the Filipino crewmen and released by the Philippines' National Bureau of Investigation, which recommended last week that homicide charges be filed against eight coastguards.

A 65-year-old Taiwanese fishermen, one of four people on board the small vessel, was killed in the May 9 incident. It occurred in waters off the northern Philippines that Taiwan also claims as part of its economic zone.

The coastguard said the Taiwanese vessel was fishing illegally and they were forced to fire in self-defence as it tried to ram them.

The video showed the Taiwanese crew initially appeared to be giving up, allowing the coastguard vessel to come alongside their boat so it could be boarded.

But as the Filipinos prepared a rope to tie the two vessels together, the Taiwanese boat reversed, then sped away with the Philippine vessel in pursuit.

As the coastguard vessel closed in on the Taiwanese boat to what appeared to be about 100 metres, Filipino voices could be heard yelling: "Shoot the engine".

Gunshots could then be heard in the background and bullets were seen hitting the water as the two vessels bounced across the waves for many minutes.

One coastguard tried to fire his rifle at the Taiwanese boat, then laughed and smiled as the gun jammed. Others were seen crouching or propping each other up to steady their aim as the Taiwanese vessel gained distance.

Eventually the fishing boat got too far away, leaving the coastguard men to watch with rifles still in hand.

The NBI later said they found 108 spent shells from bullets fired during the incident, with 45 bullet holes on the Taiwanese fishing vessel.

"The defence of the coastguard is they were threatened when (the Taiwanese boat) tried to ram them. But we can see it only backed up and then tried to escape," he told AFP.

Coastguard chief Rear Admiral Rodolfo Isorena declined to comment on the video and the NBI's findings.

Justice Secretary Leila de Lima said Tuesday she cleared the public release of the video. AFP obtained a copy of the video on Tuesday.