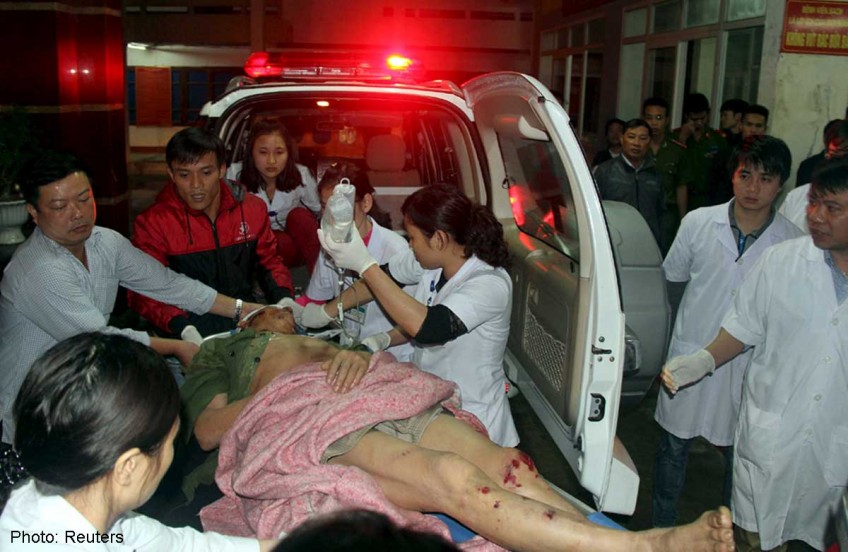 HANOI - Vietnamese soldiers and police joined a rescue mission on Thursday searching for survivors after a huge scaffolding collapsed, killing 14 workers and injuring 30 in central Vietnam, the government and state television said.

Two of the dead workers are still trapped under the rubble of the structure that collapsed on Wednesday night in the Vung Ang economic zone of Ha Tinh province. All the victims are Vietnamese, state-run Vietnam Television (VTV) said.

Rescuers were working urgently to help the victims, Deputy Chairman Dang Quoc Khanh of the provincial People's Committee said in the broadcast.

Many of the injured were in hospital in critical condition, VTV said. It showed pictures of rescue workers digging through the rubble of the collapsed steel structure.

The accident happened at a seaport project that is part of a complex owned by Taiwan's Formosa group. The workers are from a Vietnamese sub-contractor hired by Samsung C&T Corp (000830.KS: Quote, Profile, Research, Stock Buzz), a unit of South Korea's Samsung Group, the state-run Thanh Nien newspaper said.

"At the construction site, there were thousands of workers, so the number of workers in distress is not yet accurately calculated," Pham Tran De, deputy head of the zone's management board told the online VnExpress newspaper.

The incident was the latest setback for the Vung Ang economic zone, which was hit by rioting and arson attacks on facilities employing Chinese workers last year, as anti-China sentiment erupted in the wake of a maritime territorial row.