Back in Vietnam, Lien Dinh had always been a fan of Korean culture. The men in the K-dramas she watched were dashing and romantic, well-to-do, and respectful towards the women in their lives. So she moved to Korea in search of a better life and found her own Mr Right - an electrician 10 years her senior. But after settling down in Daegu, she soon found her experience of Korean society did not match the saccharine scenes on her television screen.

"The reality was far from my expectations," Dinh said. "Korean men married to foreign wives are usually old with poor manners or charisma, unlike the handsome Korean men in dramas."

Despite learning Korean, Dinh soon ran into problems with her in-laws and encountered what she says is widespread discrimination against migrant spouses - and particularly those from Vietnam. She has often been accused of taking advantage of her husband.

"Many Koreans ignore us thinking we are only people from a poor country. There's a popular misconception that migrant [wives] will run away from their marriages and children once they get citizenship," she said.

Experiences like Dinh's are becoming increasingly common as South Korea, long one of the world's most racially homogenous societies, turns to immigration to address falling birth rates that in 2018 hit an all-time low of 0.95 - or less than one birth per woman. 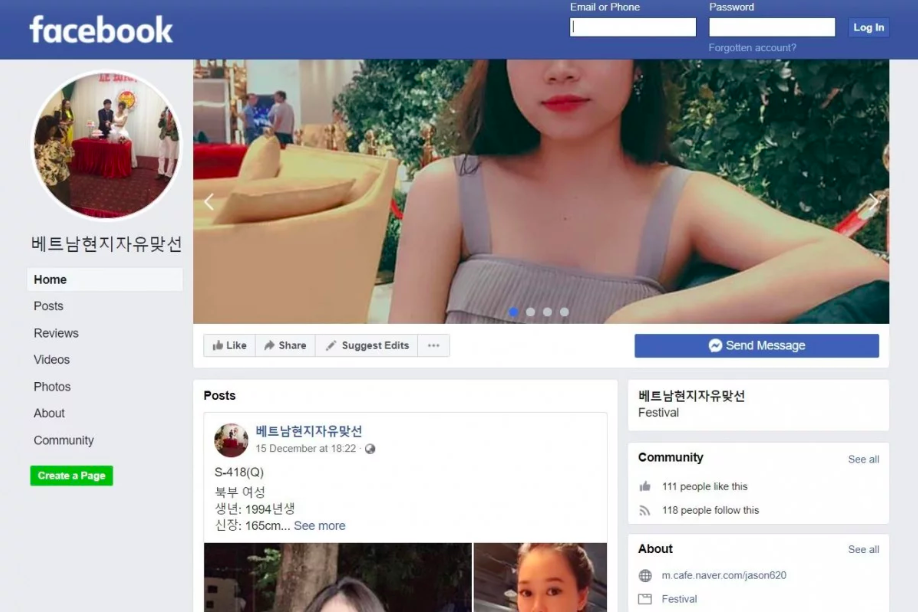 The Facebook page of a group that matches South Korean men with foreign brides. PHOTO: Screengrab

In recent years there has been an influx of foreign women into the Korean countryside, where international marriages now make up nearly a fifth - or 18.4 per cent - of all marriages, according to 2017 government figures. While these women come from a host of countries - including China, Cambodia, the Philippines, Mongolia and Uzbekistan - Vietnamese migrants account for nearly three in four of such marriages.

Rather than be welcomed as a part of the solution to Korea's troubles with its ageing society, many of the 6,000 or so Vietnamese women who marry into Korean society each year face either ostracism, like Dinh, or in some cases physical and mental abuse.

Recent cases have prompted a public outcry over the exploitation of these women and have shone the spotlight on government support of rural practices that critics describe as "bride buying", but supporters describe as "semi-arranged marriages". 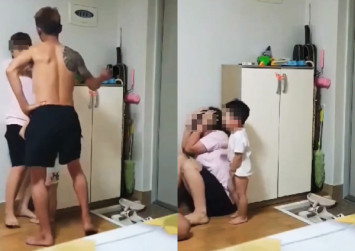 In November, a 55-year-old Korean man stabbed his 30-year-old Vietnamese wife to death and buried her body in the remote North Jeolla province, while in July a video in which a Korean husband physically abused his Vietnamese wife in front of their crying toddler went viral on social media.

In response to the incidents, the justice ministry has vowed to enforce a new law banning men with records of domestic abuse, sexual assault, murder and robbery from marrying immigrants. There are also plans to launch a new multi-language police hotline for foreign spouses.

But experts say this isn't enough and that the problems extend beyond "bride-buying" and reach deep into South Korea's patriarchal culture, its attitude to immigration and the gender-based violence that occurs across the country.

BUY A BRIDE OR ARRANGE A MARRIAGE?

Over the past few decades, as more Koreans have moved to urban cities like Seoul, rural communities and governments have struggled to find ways to repopulate the countryside. Experts say women in particular see rural lifestyles as unattractive, leading to a gender imbalance that fuels the demand for foreign brides.

A popular solution for men in the countryside is to pay for a foreign woman to migrate to Korea in a deal that usually involves paying a local or foreign marriage broker about 14.2 million won (S$16,300) for a Vietnamese bride.

Read Also
Vietnamese brides say 'I do' to South Korea 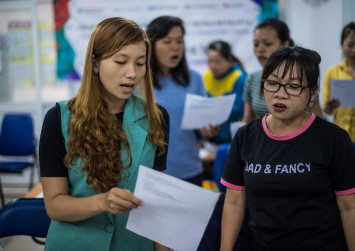 "Of course it's a matter of perspective how much agency and freedom the Vietnamese women have, but I am fairly certain that Korean men who marry foreign brides don't think of the act as 'buying' brides," said Shin Gi-wook, a Korea studies professor and director of the Walter H. Shorenstein Asia-Pacific Research Centre at Stanford University. "I think South Koreans would prefer to see it as an institution of 'semi-arranged marriages'."

However one refers to the practice, there's little doubt that it's widespread. More than 35 local governments in rural regions offer subsidies of between 3 to 10 million won for couples entering such marriages, in deals that sometimes stipulate the couple must stay together for a minimum period or return the money.

Yangpyeong county offers unmarried local men between the ages of 35 and 55 years old and working in the fishing, agriculture and forestry sectors up to 10 million won to get married to an overseas bride, according to the Korea Herald. 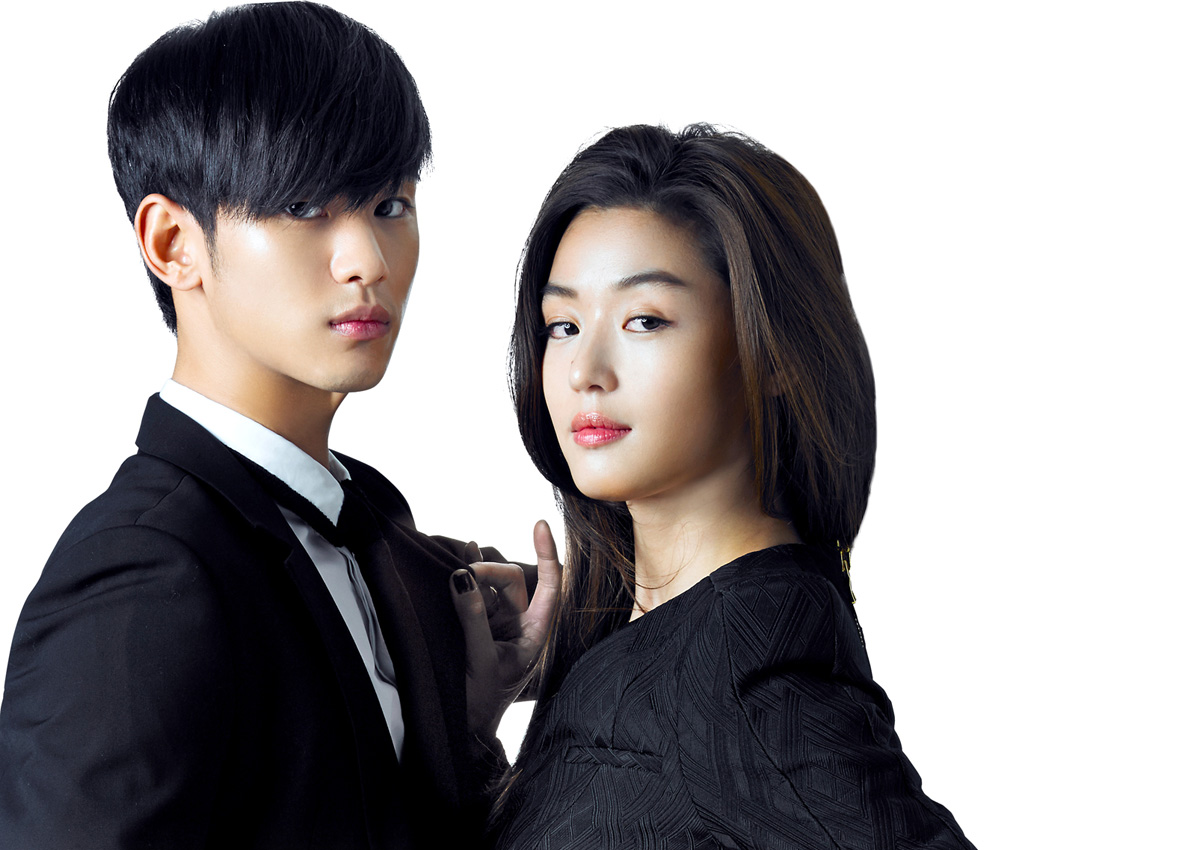 The K-drama My Love From Another Star. Foreign brides often find the reality in South Korea is somewhat different. PHOTO: SBS ONE

The specifics of actually finding a wife are left up to the men. Many turn to social media and online marriage agencies to find brides: "I am 40 years old, never married, and am looking for someone who is not playing around, someone seriously looking for marriage," posted one man in a private Facebook group titled "Would you like to find a Vietnamese wife?"

In another Facebook group for Korean men, marriage agencies in Korea and Vietnam post on behalf of Vietnamese women, citing their ages, a brief description and their candidate number. Most seen by This Week in Asia were born between the late 1990s and early 2000s, with one description reading: "She is studying Korean, so she can move to Korea very soon if you get married. S-236 comes highly recommended."

One Seoul-based marriage agency said customers paid deposits of 2 million won before flying to Vietnam for a six-day trip where they would go on dates with up to 20 Vietnamese women.

"If you meet someone you like, you can have your marriage ceremony and complete the legal process of marriage registration during the trip," said the representative. Brides then take a three-month language course to prepare them.

For the full price of 12 million won (US$10,350), which includes a dowry to the woman's family, the process from marriage to immigration takes about six months. "In order for the Vietnamese bride to receive her international marriage visa, the man must clearly state his residence, have no record of sexual assault, and earn an annual salary of at least 18 million Korean won."

The representative said many Vietnamese women came to them looking for financial stability. "This is the biggest reason for women who are coming to live in a foreign land with a person who doesn't speak the same language or share the same culture … They want to live in a place that is more economically stable than Vietnam, and they want their kids to grow up in a country that has a promising education system."

A 2017 report by the Korean ministry of gender, equality and family found that Korean men who married Vietnamese brides were on average 43.6 years old when they tied the knot. Their brides were an average age of 25.2 years.

When the relatively young women arrive, many - like Dinh - realise that the reality of life in the country does not match their vision.

"K-dramas and K-pop convey a vision of South Korea as much kinder and gentler than it in fact is, especially in regards to gender relations," said John Lie, a professor of sociology at the University of California, Berkeley.

He added that unlike the privileges white foreigners in Korea receive, much of the mistreatment of Vietnamese and other Southeast Asian foreign women "is based on their presumed inferiority". 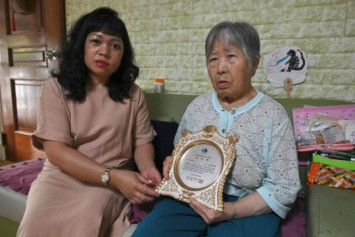 Experts say to improve these women's lives, government initiatives will not be enough unless society itself becomes more tolerant of diversity.

While foreigners now account for 3.6 per cent of the nation's population, immigrants are still not well accepted, said Shin Gi-wook at Stanford University.

"Korea is still a very homogenous society and Koreans have not been used to living with non-ethnic Koreans," Shin said.

It was not until the late 1980s that Koreans were allowed to leave the country, he noted, meaning many people were not fully ready to embrace multiculturalism.

In a recent survey published by the ministry of gender, equality and welfare in April, only 42.48 per cent of 4,000 respondents were "willing to mingle with immigrants".

Shin said that while the government had pushed multicultural policies, too often these focused on assimilating foreign residents to the Korean way: "Multiculturalism should be a multidirectional interaction where Koreans also learn from and appreciate different cultures.

John Lie of the University of California, Berkeley, said acceptance of other cultures was not enough and that society needed to change its patriarchal and often misogynistic treatment of women.

He said all women needed better resources and support. "Better childcare facilities and lowering the burden on working mothers and attenuating the worst excesses of patriarchal practices would be the two obvious policy options."

Shin Gi-wook of Stanford said the most important change needed to come from the public.

"Government policies can facilitate convenience, but they can't change people's attitudes," he said. "The most important thing is to educate Koreans about society's need to accept and care for these foreigners, to appreciate the different cultures in the community, and ultimately to become a truly global society for its own sake."