A pair of Indonesian lawyers are planning to sue a state-owned pharmaceutical firm after it was discovered to have allegedly reused nasal swabs for coronavirus tests for thousands of people.

Last week, police arrested five workers at Kimia Farma, including its Medan business manager, who were accused of washing and repacking cotton swabs at the company’s main office in the city, and then sending them to Kualanamu International Airport where they were used on unsuspecting travellers.

It is mandatory for people to produce a negative Covid-19 test result before going on board a flight, and many passengers choose to have the procedure done at an airport instead of a local hospital or clinic to save time.

Kualanamu airport offered the tests in conjunction with Kimia Farma, a major pharmaceutical producer and distributor which reported an annual revenue of 9.4 trillion rupiah (S$870 million) in 2019.

Local police said that the alleged fraud came to light when an undercover police officer took a test at Kualanamu International Airport which produced a false positive result. The officer subsequently tested negative for coronavirus, the police added.

Two passengers who regularly passed through Kualanamu airport were human rights lawyers Ranto Sibarani and Kamal Pane, who travelled to Jakarta from Medan almost every week from December 2020 to February 2021 to attend hearings for one of their cases at Jakarta’s Supreme Court.

Sibarani said he must have taken more than 10 tests during that time, and that he suspected that something was amiss from the outset.

“It was an awful experience because they did the tests far too deeply and insisted on swabbing my nose several times during a sitting, to the point I complained that the procedure was not being conducted professionally,” he said.

“Now, with the benefit of hindsight, I suspect the reason for having to swab my nose multiple times and do the test so deeply was because they were using rewashed, second-hand swabs which made the procedure more difficult,” he said. “I feel that I am the victim of serious fraud and that I was violated through my nose.”

Sibarani and Pane are planning to claim damages from Kimia Farma of 1 billion rupiah (US$69,000) per affected passenger and are compiling statements from potential victims of the scheme to launch a collective civil lawsuit.

Medan’s police chief, RZ Panca Putra Simanjuntak, told reporters that more than 9,000 passengers may have been affected by the recycled rapid test kits. Between 100 and 200 passengers were tested every day at the airport, some with real kits and others with the repackaged ones. 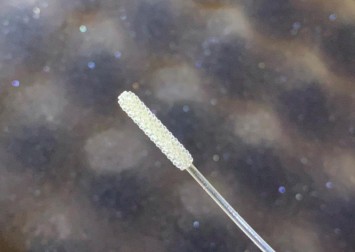 According to Simanjuntak, the motive for the scheme was financial gain, as Kimia Farma was charging 200,000 rupiah (US$14) for each test, a fee which was collected by its employees each time a second-hand swab was used.

The Kimia Farma employees may have pocketed up to 1.8 billion rupiah (US$125,000) since mid-December, said Simanjuntak, adding that authorities had seized more than 149 million rupiah (U$10,000) in cash during the arrests.

He added that the police are following whether any passengers were infected by the reused swabs.

An airport official, speaking on condition of anonymity, said that airport staff had been blindsided by the news of the forged rapid tests and that the mood at the airport was one of shock.

“We had no idea this was happening and can’t believe anyone would do such a thing,” he said. “The airlines trusted Kualanamu airport to facilitate these tests, but this incident was out of our control.”

The official added that airport operations were running normally following the news of the swabbing scandal, and that the Kimia Farma testing centre at the airport has been closed and sealed by the police.

“We are now working with other vendors to provide rapid tests and offering a drive through service in the parking area for passengers,” he said. “Hopefully this case will be swiftly solved and the police will find out who the main culprits are behind it.”

Indonesia has reported almost 1.7 million coronavirus cases since the pandemic began and more than 45,000 deaths.

While testing at airports is mandatory, public testing and contact tracing is low, with just under 10 million people having received antigen tests out of a population of over 260 million, according to figures provided by the Indonesian Health Ministry.

Pane said Kimia Farma “should immediately stop all rapid testing across the country and its offices and test centres should be audited by independent teams to check for any further signs of fraud”.

“We wonder if there is an even larger case to uncover here,” he added.

Under Indonesia’s health law, the suspects could be jailed for up to 10 years if found guilty. Lawyer Sibarani said that under Indonesian corporate law, Kimia Farma was also ultimately responsible for the actions of its workers.

“It is a nightmare to know that a company as big as Kimia Farma could allow this to happen, but pharmaceutical companies all over the world have always been about money and nothing else,” he said.

“For years these companies have made a profit from people’s health, and this is just another example of their corporate greed. But this is not a typical case, because it involves a deadly virus.”