The woman is seen hanging her dogs in mid-air briefly in a bid to separate them.

A pet owner was arrested on Tuesday after a viral video showed her kicking and hanging her two dogs in mid-air during a bungled attempt to stop her poodle from biting the Pomeranian, which later died.

The incident happened in the Lions Nature Education Centre off Hiram's Highway in Sai Kung soon after 5.30pm on Monday.

The video footage showed the woman having a dispute with another pet owner after the latter claimed her dog had been bitten by one of the woman's dogs in the park.

In the middle of the dispute, the poodle suddenly attacked the Pomeranian in the neck. The woman kicked her pets, and at one point was hanging both dogs in mid-air briefly by lifting the leashes in a failed attempt to separate them.

She then used her hands to open the poodle's jaws to free the Pomeranian which by then was bleeding and motionless.

When other pet owners came to offer help and asked her to take the pet to an animal clinic quickly, the woman replied "Go away" before walking away.

Officers from Wong Tai Sin district crime squad began an investigation into animal cruelty after a man filed a police report on Tuesday.

The 64-year-old woman was later picked up in Sai Kung. Police arrested her over animal cruelty and disorderly conduct in a public place. 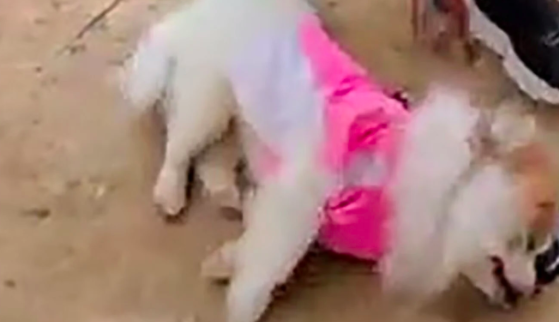 The Pomeranian lying motionless after being bitten by the poodle. PHOTO: Facebook

As of Tuesday afternoon, she was being held for questioning and had not been charged.

A source familiar with the case said the woman had put the poodle to sleep with the help of a vet.

A Facebook user, who looked like the woman in the viral video and had posted pictures of herself with the two dogs, said she decided to put the poodle to sleep because this was the fourth time it had attacked other dogs, and she could not bear with it any more.

She called the poodle Jazz and the Pomeranian, Pony. 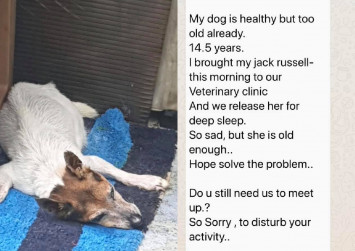 The Society for the Prevention of Cruelty to Animals said it was very concerned with the unfortunate incident that led to the death of the two dogs, and would provide the necessary support to police in their investigation.

Dog trainer Daniel Tang Yip-hay said dog owners should first control their emotions in such a situation because noise would further agitate the animals and would not help in any attempt to pull them apart.

The woman also should have better managed the leashes as they were seen entangled and she was hanging the dogs in mid-air without realising it.

He reminded owners of dogs which had serious behavioural problems, such as the poodle in this case, to provide their pets with proper training, or have them wear muzzles during a walk.

Tang questioned if the Pomeranian's death was related to the poodle's bite which only lasted briefly, noting that the mid-air hanging or possible hidden heart issues might be the more likely reasons for its demise.