Health workers in protective gear practice handling a suspected coronavirus patient at a hospital on Indonesia's resort island of Bali on Wednesday.

Frantic customers throwing any non-perishable items they can get their hands on into shopping trolleys. Face masks, disinfectants and floor cleaners vanishing from pharmacy shelves, with no replacement stock available.

These have been some of the disturbing regional fallouts from the deadly coronavirus outbreak, with multiple instances reported in Singapore, Hong Kong and Japan.

The same thing is now happening in Indonesia. The only question is why?

As of Friday, neither the Indonesian government nor the World Health Organisation had confirmed a single case of the coronavirus or Covid-19, the pneumonia-like disease it causes, in the country despite it being encircled by infected neighbours.

Hundreds of Indonesian and Chinese nationals who have been in China in recent weeks remain under quarantine for observation, however, and The Jakarta Post reported a 19-year old Indonesian university student had been quarantined in the Maluku Islands after falling ill following a trip to Malaysia.

In Jakarta on Thursday and Friday, a random search of commercial pharmacies near the centre of the Indonesian capital, ranging from high-end shopping malls to slum neighbourhoods, found masks, antiseptic tissue wipes and household cleaners were all sold out. There have been similar reports from multiple cities across the archipelago nation of more than 260 million people, particularly shortages of face masks.

Marc Lipsitch, a Harvard professor who helped produce research identifying countries that could have undetected cases of the virus, defended the findings despite the Indonesian government's efforts to downplay the threat.

"The purpose of our study is to look at whether the detected cases are really representative of the total number of cases," he told The Jakarta Post last week.

"So, to do that we examined the statistical relationship between the number of travellers to a country to the number of cases detected. There was an international average of 14 travellers per day associated with one detection of a case during the whole period we studied. By that standard, Indonesia would have been expected to have five cases, approximately, but it had zero during that period."

In response, Health Minister Terawan Agus Putranto described the study as an "insult" to Indonesia.

Officials from the Indonesian Health Ministry have been besieged by online fake news "virus reports" and questions about how the country could possibly not have a single case, given its poor initial response to the bird flu virus more than a decade ago and substandard public health sector. However, they claim there are more "hoax" viruses than actual ones.

"There has been a misconception that wearing a mask is a basic need," Wiendra Waworuntu, the ministry's communicable disease prevention and control director in Jakarta, told the state-run Antara news agency. "In fact, the basic needs are consuming nutritious foods in a balanced diet, getting enough rest and, if you are not feeling well, immediately checking yourself into a health facility."

The fear is real, but some in the capital see other forces at play, triggering unpleasant terms such as "pre-hoarding" and "pre-panic".

"Some people are trying to take advantage. The economy is supply and demand, so 'they' are doing it for their own financial gain, because people are scared," said Indra Murida, as she ate a breakfast of rice porridge within a ramshackle row of open-air streetside eateries, known as warungs, in the shadow of the high-rise office building where she works for an insurance company.

"But I am worried. I guess everyone is worried - aren't you worried? I believe my body immunity is good, but in Singapore, they are buying everything off the shelves."

Nearby, Saipul, 39, who owns three streetside stalls in the area, said fear about the coronavirus had caused the price of Indonesian staples such as chillies, garlic, eggs and aubergine to balloon to about double the normal price.

Saipul said he is not personally worried about a coronavirus outbreak in Indonesia, and that he has tried to avoid increasing prices for the typical breakfast and lunch fare he sells. But he worries about the state of mind of others.

"People think about the virus and see what happens?" he said. "The prices were already high enough. People are scared." 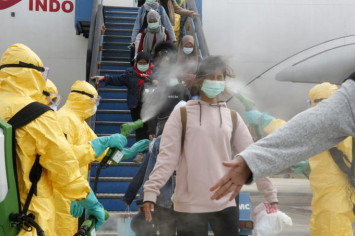 These fears have found expression online. On one popular Indonesian e-commerce site, the price of a 12.5-ounce (354-gram) can of the international brand Lysol disinfectant spray has nearly quadrupled from about US$6 to US$22. A 19-ounce can for sale online in the South Sumatran city of Palembang is going for more than US$50.

Around the corner from the food stalls, law students Sharine Gultom and Brenda Rampen, both in their early 20s, talk about the outbreak while sitting on a curb drinking coffee and smoking cigarettes before class at Atma Jaya University across the street.

Both said they can empathise with the fear - and the run on protective masks, disinfectants and other items people feel they need.

"People have bought as many things that they can get their hands on," Gultom said. "It's worrying - just watching the news about suspect cases. I think many media are sensationalising [a potential outbreak] too much."

The two women both live with their families as their university does not have dormitories, so they also have to help deal with securing cleaning supplies amid the shortages just to keep their homes in order. But it has not been easy.

The one phrase Rampen keeps hearing at every store she visits? "Sold out," she said.