Walk on the wild side in China cross-dressing contest 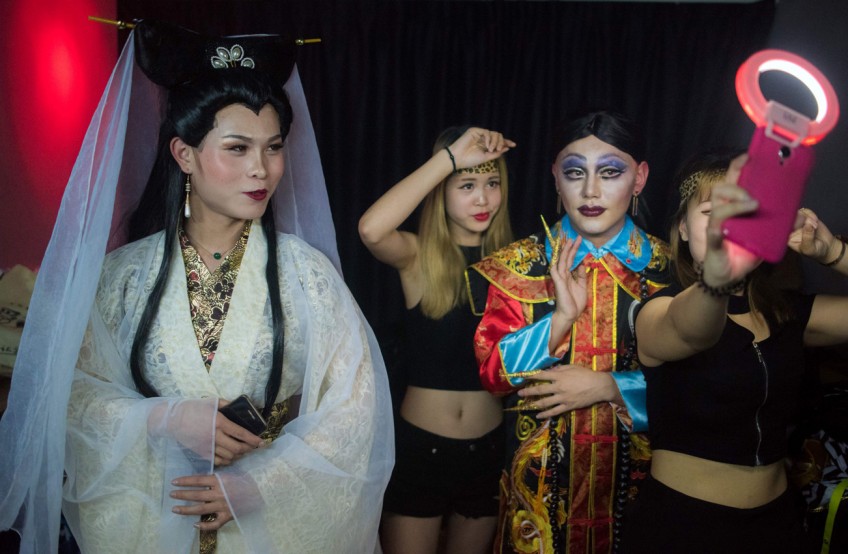 This picture taken on April 22, 2016, shows Yo Xiaoyang (L) - who uses the stage name Xiao Bai meaning "Little White" - posing with other contestants for a selfie before the final of Big Queen, a cross-dressing contest in the Icon Club in Shanghai.
AFP

Yu was among 20 contestants taking part in a cross-dressing competition in China's commercial hub.

"At work, I have to wear a poker face from Monday to Friday, just like a zombie," said Yu, who works in the financial industry. "But Friday nights and the weekend, I can be my real self." Conservative attitudes remain widespread in China, where the ruling Communist Party still dictates social norms.

The country only decriminalised homosexuality in 1997 and discrimination is common, although tolerance is greater in major cities, and the Shanghai Pride group mounts an annual series of events for the lesbian, gay, bisexual and transgender (LGBT) community and their supporters.

For its part the transvestite contest was sponsored by Twone Information Technology Co, which offers a dating app and event ticketing platform aimed at LGBT people.

"Cross-dressing plays a very important role in the pursuit of freedom and tolerance, and is a vital channel for people to see the LGBT community," said Ding Shunfeng, one of Twone's founders.

"I want them to come out and I want to unearth them and tell society that China has cross-dressing queens and their art is beautiful." Contestant Yu - who finished third - used party balloons to fill out his chest and estimated he has spent tens of thousands of dollars on outfits, wigs, cosmetics and shoes.

His favourite look is a lady in white, who wears a flowing, pale chiffon gown, and he uses "Little White", or "Xiao Bai" in Chinese, as his stage name.

"I think everyone has their own special pair of heels in their hearts and wants to dress up the way they want," he said.

Some participants donned Chinese "qipao", the high-necked dress slit far up the thigh, while others sported sequin-covered dresses and short shorts.

Besides men dressing as women, the contest included one woman and a transgender individual.

The contest organisers said authorities did not interfere with the event, despite the LGBT club venue drawing large crowds on the several Friday nights it took place.

"There has been no government interference, but there is pressure from society," said Ding of Twone. "The social pressure is being labelled as an event held by sissies and perverts."