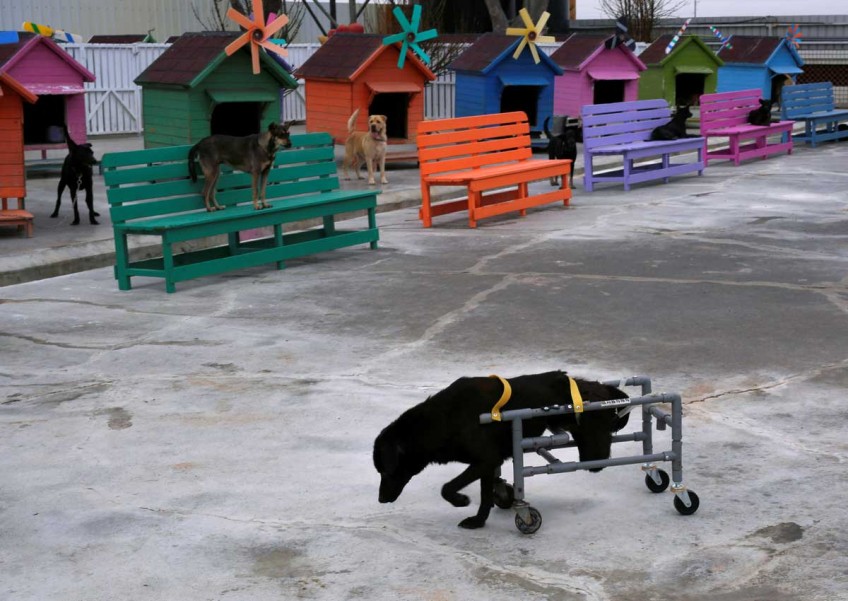 Disabled dogs at an animal shelter in Taiwan's southern city of Tainan, can now walk and run again, thanks to wheelchairs designed for them by a pet enthusiast.

After a friend rescued an injured stray dog, she was charged by the animal hospital for the wheelchair costs after it became clear that the dog would not be able to walk on its own.

Instead of paying for the expensive commercial dog wheelchair, Pan Chieh decided to make one himself.

"The first dog recovered completely after using the wheelchair, which gave me a lot of confidence," Pan said, adding that he has been making wheelchairs for dogs and cats ever since, starting with heavy wooden models and finally arriving at the current cost-effective water pipe design.

The current model uses readily available plastic water pipes that are cut to size and connected by joints, enabling him to customize wheelchairs to the specific needs of each animal.

The material costs for one wheelchair come in at around 1,000 TWD (S$45.90), less than one-third of the price of commercially available models, according to Pan.

Pan, a 40-year-old machine operator, visits different shelters and homes of pet owners throughout Taiwan on weekends together with his girlfriend, building wheelchairs for animals in need.

The couple charge a minimum of 5,000 TWD to cover travel and material costs, but often offer to work for free in cases where animal patients have no one to sponsor them.

Taiwan's many stray dogs and cats face the danger of being hit by cars or walking into paw traps, especially in the island's remote mountain areas where farmers put up traps to prevent animals from devouring their crops.