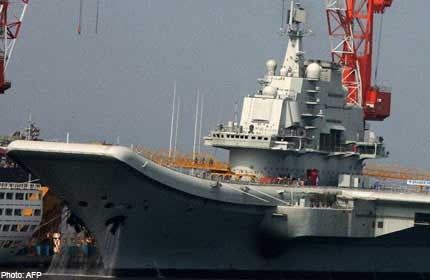 The launch of India's first locally built US$3 billion (S$3.78 billion) aircraft carrier on Monday will be a major naval milestone as China's growing assertiveness is drawing world powers to the region.

The 40,000-tonne INS Vikrant, to be launched at the Cochin Shipyard in Kochi in the south, will take the country one step closer to realising its "blue-water navy" dream of operating two full-strength combat battle groups before the end of the decade.

A blue-water navy is one that can operate in oceans away from its own shores. India has only one light carrier, INS Viraat, which is 50 years old and more of a showpiece than a war machine.

The Vikrant puts India in an elite group of five countries, alongside the US, Russia, Britain and France, that build carriers of this size. "It will be a historic moment for the country, a major leap in our military technology prowess," Vice-Admiral (Ret) Anup Singh told The Straits Times.

Underlining the complexity of the project, the Vikrant's launch was delayed by three years because of slow construction and a problematic gearbox. More trials will be conducted and the warship will be fully fitted out before it is inducted into the navy by around 2018. It will add to the Indian navy's capability while regional tensions flare in the South China Sea as Beijing flexes its muscles.

In June last year, the United States unveiled a new military strategy: It will shift a majority of its naval ships to the Asia-Pacific region by 2020. The US is not a claimant state in the South China Sea territorial disputes but has traded barbs with China over the issue in recent years.

Former US defence secretary Leon Panetta said last year that Washington wants India to be the "linchpin" in its military strategy in the Asia-Pacific - a comment widely seen as encouraging New Delhi to lead a campaign to counter- balance China in the region.

"The Chinese will be watching the launch very closely as this will have long-term consequences for regional security," said Commodore Uday Bhaskar, former director of the National Maritime Foundation, a New Delhi think-tank.

India's ambition to have an indigenous carrier goes back to 1948 when the first Congress government spoke of having three light carriers. Now, the navy aims to deploy two full-fledged combat battle groups as soon as possible.

India is also building a 65,000-tonne conventional or nuclear- powered carrier, INS Vishaal. It is at the design stage and will take years to launch.