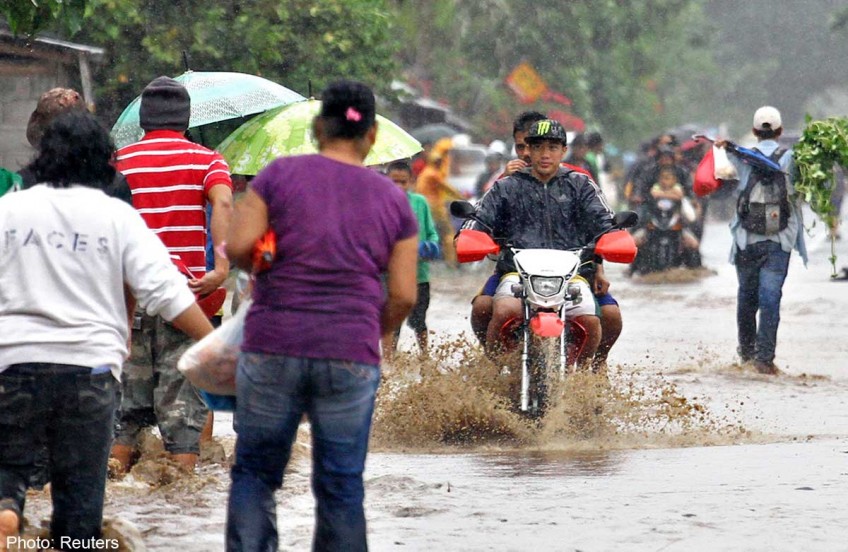 Flood victims ride on motorcycles past residents walking along a road after evacuating their homes due to heavy flooding brought by tropical storm Seniang in Misamis Oriental, on Mindanao island in southern Philippines December 29, 2014.

RONDA, Cebu - Delma Bahinting squatted on the damp floor, staring at her feet covered with mud. A few feet from her, lie some of the bodies of the dead in a flash flood that struck this town on Tuesday-her son, Junaldo, 35, and his three children.

Wiping her tears, she said the memory of how her son, his wife, five children and an infant, were swept by floodwaters would remain etched in her mind.

"We don't know where to start. The new year is here but my son and his family are all gone in one sweep," said Delma.

Only five bodies of the Bahintings were found-Junaldo; his wife Evelyn, 40; children Juvelyn, 10, Joan, 8 and Jean, 5. Still missing are the couple's two-year-old child, Joyce and Ace Faunillan, a month-old infant.

The Bahinting family members were among the 15 people who were killed in flooding in southern Cebu brought by Tropical Depression "Seniang." At least 49 people are dead in the Visayas alone.

Aside from the Bahintings, eight others died in this town and one each in the towns of Alegria and San Francisco on Camotes Island, Cebu province.

Seniang also killed three in Bohol, 21 in Catbalogan City in Samar, nine in Leyte and another in Antique.

The Bahintings lived in houses next to each other in Barangay Tupas in Ronda, some 60 km south of Cebu City.

Delma said the water started to rise to at least 6 feet around 1 a.m. on Tuesday, prompting Junaldo to bring his family to the second floor.

Junaldo's house was not near a river but floodwaters mixed with mud cascaded from the mountain and toppled the first floor, making the two-story house collapse like a deck of cards.

Delma said the floodwaters were mixed with mud, apparently because soil from the denuded mountain had been loosened.

"We prepared for Typhoon 'Ruby.' But we didn't expect Seniang would be more devastating because it just rained and there was no strong wind," she told the Inquirer in Cebuano.

Delma said she was hoping to find Joyce and Ace alive, or at least their bodies. "We will accept what happened to them," she said.

Ronda Mayor Mariano Blanco III said the residents had been told to move to safer ground in preparation for Seniang but some were too stubborn and stayed.

"They said they were already tired of evacuating. Now, this is the result," he said.

Blanco said Tuesday's floods were the worst in the town in 30 years. Floods are often caused by the swelling of the river in the town.

But on Tuesday, Blanco said the flood was caused by rain water from the mountain pouring into the lowland.

In Samar, 21 bodies, six of them children's, were recovered from the mounds of earth that buried six houses and two vans in the village of Mercedes in Catbalogan City, on Tuesday.

One of the dead is a three-year-old girl who was among the passengers of a van that was buried in a landslide.

Eliot Lopez, city disaster risk reduction management officer, said most of those who died were asleep when the landslide struck.