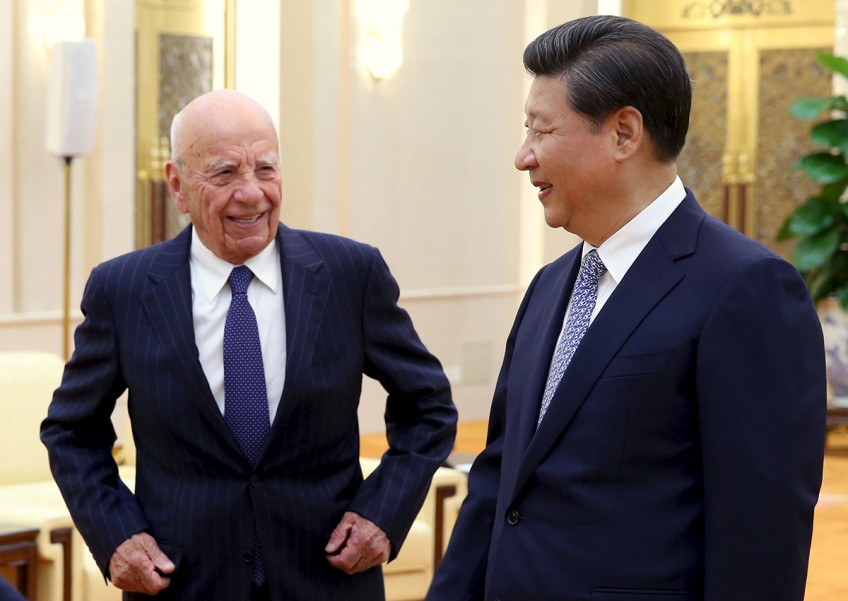 BEIJING - Chinese President Xi Jinping has told Rupert Murdoch that Western media organisations are "welcome" in China, despite the continued blocking of numerous foreign websites for their reporting on the country.

"(We) welcome foreign media and correspondents to cover China stories, introducing China's development to the world, and helping the world grasp the opportunities (afforded by) China's development," Xi said Friday as he met with Murdoch in Beijing, the Xinhua state news agency reported.

The News Corp chairman was received at the Great Hall of the People in Beijing, known as the symbolic heart of the Chinese Communist Party.

"We are very happy, in my newspapers and different news outlets, to try and foster more understanding between our two countries (the United States and China), I think not just on a formal basis, but also with people themselves," Murdoch told the state-run China Daily, which ran their meeting on its front page.

Murdoch's visit precedes the Chinese head of state's upcoming visit to Washington, which the tycoon assured Xi would be covered in full, according to Xinhua.

It also comes as Murdoch's entertainment subsidiaries look to expand in the Chinese market, with 21st Century Fox reportedly seeking a Chinese partner to build theme parks built around popular films and television shows such as "The Simpsons".

The Chinese head of state's comments have surprised some observers given the government-ordered blocking of the Chinese-language websites of the New York Times, Bloomberg News, Reuters and Murdoch's own Wall Street Journal.

China's treatment of foreign correspondents has also been widely criticised after new reporters for The New York Times and Bloomberg were not given residence visas - apparent retaliation for investigative stories on the wealth amassed by leaders' families.

Since becoming party chief in November 2012 and state president in March 2013, Xi has spearheaded a crackdown on corruption within the party and government that has seen low-ranking "flies" and once high-flying "tigers" brought down.

However, in 2012 The New York Times and Bloomberg News published investigations into vast wealth said to have been amassed by family members of former premier Wen Jiabao and Xi. Neither official was accused of wrongdoing.

Foreign correspondents are also regularly prevented from carrying out reporting or meeting activists by police, while their communications and movements are carefully monitored and travel to restive regions such as Tibet is off limits.