What does a Marcos Jr presidency mean for Asean and democracy in the region?

Students and activists march in Manila outside the Commission on Elections on May 10, 2022.

Ferdinand “Bongbong” Marcos Jnr’s landslide victory in Monday’s presidential election could prove to be a double-edged sword for Southeast Asia, depending on how he positions the Philippines amid the ongoing superpower rivalry, according to analysts.

Marcos Jnr’s win is also a sign of democratic regression in a region which has in recent years witnessed a widespread decline in democratic norms and governance, the experts said, adding that there appeared to be a trend of growing support for autocracy in Southeast Asia and beyond.

Marcos Jnr is the son and namesake of the late Philippine dictator whose family has been synonymous with kleptocracy in Southeast Asia for decades.

The senior Marcos was ousted by a “people power” revolution in 1986 following two decades of rule, during which he was accused of egregious human rights abuses and the plundering of more than US$10 billion from the country’s coffers. While some US$3 billion are said to have been recovered, about two dozen lawsuits are still pending to obtain another US$2 billion.

Benjamin Ho, assistant professor at the S. Rajaratnam School of International Studies, said the Philippines’ ties with China and the United States would be keenly observed by the region.

“It will be interesting to see whether Bongbong will follow his predecessor Rodrigo Duterte’s example in reaching out to Chinese President Xi Jinping and giving the Americans the cold shoulder after taking power,” he said.

Aries Arugay, a visiting fellow at the ISEAS-Yusof Ishak Institute in Singapore, said the new leader would need to recalibrate and reboot ties not only with major powers but also its Southeast Asian neighbours. He noted that when Duterte took office, his first state visits were to Asean countries.

“There will be a fresh start,” Arugay said. “He can engage the US without the negative historical and personal baggage that Duterte had, and he can also ask China to negotiate with him.”

Rifki Dermawan, an international relations lecturer at Indonesia’s Andalas University in West Sumatra, said how the Philippines positioned itself in the US-China rivalry could affect Asean centrality, referring to the core principle that emphasises the 10-nation bloc’s role in regional security and the power dynamics between and among external powers that have interests in the region.

Manila “has been getting closer to the US in terms of defence cooperation, while China remains an important actor in the Philippines’ domestic economy”, Dermawan said, adding that maintaining Asean’s unity in the Indo-Pacific required the collective voices of its member states.

Charles Dunst, an associate at The Asia Group based in Washington DC, said Marcos Jnr might seek to use Asean as a platform to address the South China Sea dispute.

“(It) would help Marcos score political points at home but perhaps create friction with some of Asean’s more pro-China members,” Dunst said, adding that Marcos Jnr was expected to run a more professional and predictable administration than predecessor Duterte, which could smoothen cooperation with Asean partners.

Last month, Duterte and Xi stressed the need to exercise restraint in the South China Sea during a phone summit, according to Manila’s presidential office.

After taking office in 2016, Duterte pursued warmer ties with Beijing, setting aside a long-standing territorial feud over its claims in the South China Sea in exchange for billions of dollars of aid, loans and investment pledges.

For now, a Marcos Jnr presidency is likely to spell continuity in the Philippines’ approach to regional politics, suggested Chong Ja Ian, an observer of China’s influence in Southeast Asia.

Marcos Jnr may wish to develop ties with China, he said, but may find complications in Beijing’s continued arming of reclaimed maritime features in the South China Sea and efforts to enforce its writ in the disputed waters. “That could spell continued momentum to develop security ties with the US.”

However, Dunst said the traditionally strong US-Philippines alliance had been “somewhat adrift” since Duterte took office, and Marcos Jnr may look to lean more towards Washington, especially given the popularity of the US among Filipinos.

“But the Marcos family’s history – and outstanding US litigation against them – could complicate relations between Washington and Manila,” Dunst noted.

Yang Jinglin, an associate professor at the Center for China-Asean Studies at the Guangxi University for Nationalities, said Marcos Jnr was likely to “maintain a distance with the US and will continue with Duterte’s China policy, especially in the South China Sea”.

The incoming Philippine leader was likely to strengthen security cooperation within Asean, reduce military dependence on the US and seek to weaken the political influence of major powers within Southeast Asia, she said.

Joshua Kurlantzick, senior fellow for Southeast Asia at the Council on Foreign Relations, said Marcos Jnr’s victory was “terrible for democracy in the Philippines and adds to the regional democratic regression”.

“It shows impunity, there was never any real punishment for the Marcos family’s actions, and it is likely Marcos Jnr will further degrade Philippine democracy after Duterte,” he said, adding that the Marcos Jnr campaign appeared to have used disinformation as part of its election strategy.

Ahead of the poll, the Marcos Jnr camp and its supporters were said to have conducted an extensive social media disinformation campaign aimed at remaking the Marcos brand and even expunging its notoriety, according to observers.

Arugay said Southeast Asian governments might have been more “uncomfortable” if rival Leni Robredo had won, judging from the democratic ideas that she represented. “Democracy has been in deficit in the region for a very long time,” he said.

Read Also
Philippines' Marcos tells world to judge him by actions, not family's past 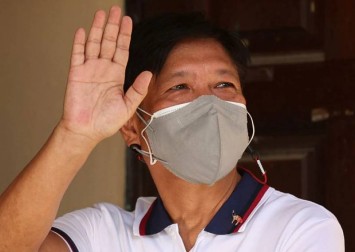 Last year, Myanmar’s military junta seized power from the democratically-elected government, while Thailand witnessed a military coup in 2014 only to hold what many observers had widely criticised as a rigged election in 2019.

In Indonesia, some officials have in recent months discussed the possibility of amending its constitution to extend President Joko Widodo’s term.

Arugay said the Philippine election result showed a further backsliding of the liberal model of democracy the country once championed, including human rights and the rule of law.

“In the region, the Philippines used to be the last bastion of democracy,” he said. “That was taken away from us when we elected Duterte to power, and this will likely continue or might even worsen in the Marcos Jnr presidency.”

Arugay noted Marcos Jnr was not the only figure of concern. His running mate Sarah Duterte-Carpio, the daughter of outgoing President Duterte, also secured a huge victory in the race for the vice-presidency. “Their alliance is the cartelisation of dynasties that is pretty much an existential threat to liberal democracy,” he said.

The Asean Parliamentarians for Human Rights (APHR) on Tuesday expressed concerns that the incoming Philippine administration may not include human rights in its agenda, given that Marcos Jnr had “systematically whitewashed the appalling human rights record of his father”.

Marcos Jnr and his camp had used social media to run large-scale disinformation campaigns during the presidential campaign, a strategy that enormously influenced the election outcome in a country with more than 92 million recorded social media users.

“The victory of the son of a dictator and the daughter of a human rights abuser, both of whom have staunchly defended the legacy of their fathers, do not bode well for the restoration of rule of law and respect for human rights in the country,” said Charles Santiago, APHR chairperson and a Malaysian parliamentarian.

On Tuesday, Marcos Jnr vowed told the world to judge him by his presidency, not his family’s past.

“Judge me not by my ancestors, but by my actions,” Marcos said, according to a statement by his spokesperson Vic Rodriguez.

“This is a victory for all Filipinos, and for democracy,” spokesman Rodriguez said. “To those who voted for Bongbong, and those who did not, it is his promise to be a president for all Filipinos. To seek common ground across political divides, and to work together to unite the nation.”