What people in S. Korea think about Kim Jong-un 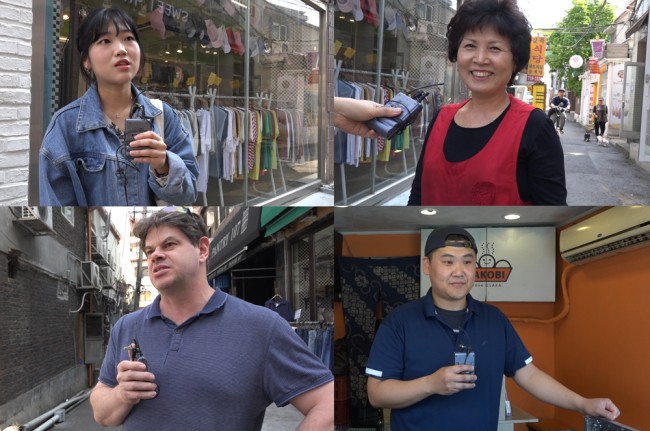 Koreans on the street talk to The Korea Herald about North Korean leader Kim Jong-un in Yongsan-gu, Seoul, on May 10.
The Korea Herald/Asia News Network

Amid an ongoing series of diplomatic moves, North Korean leader Kim Jong-un appears to be lifting the veil that has surrounded him and the North Korean regime long before he took over as the country's leader in 2012.

South Koreans' responses to media exposure of Kim, in particular the historic April 27 inter-Korean summit held in the border village of Panmunjeom, ranged from skepticism to amusement and surprise.

During the daylong summit, South Koreans were able to witness, via live broadcast, sides of the North Korean dictator they had never seen before.

"It felt like he does have a softer side," said Choi Je-sook, 64. "I had previously thought he was an ignorant and belligerent person with no principles. But seeing him on TV, I thought he seemed unexpectedly soft. He seemed like someone with tolerance."

Others were more wary. Kim Na-hyun, 21, was amused by Kim Jong-un's jovial manner and his joke on bringing Pyeongyang Naengmyeon, or North Korean-style cold noodles, to Panmunjeom.

"It was funny, but that was it," she said. "It didn't make me believe that he was actually a good person."

Moon Jin-kyu, 38, said that the summit achieved significant success in covering up a lot of the "negative perceptions" and antipathy that South Koreans had harboured toward the unpredictable Northern leader.

Koreans on the street talk to The Korea Herald about North Korean leader Kim Jong-un in Yongsan-gu, Seoul, on May 10. (Park Ju-young/The Korea Herald)

However, the North Korean leader's personal image should not be seen separately from the alleged atrocities in the country.

"(The new image) doesn't negate in any way, shape or form the allegations against (the North Korean regime) in terms of human rights," Daley added.