Instead of returning to politics, former Jakarta governor Basuki "Ahok" Tjahaja Purnama might try his hand in oil - and become a talk show host on television.

Ahok's lawyer Teguh Samudera said Ahok had been planning to venture into the oil business for a long time and would look for offices near the Hotel Indonesia traffic circle, the heart of the country's business and government activities.

The traffic circle is around 3.3 kilometers from Ahok's previous office, City Hall.

"The [new] office may not be big, but it would be sufficient," Teguh said on Tuesday as quoted by Antara.

The lawyer also said that Ahok would sign a contract with a private television station to host a show after his release.

Ahok, who ran for reelection as governor in 2017, was convicted of blaspheming the Quran in the same year following a bitterly contested gubernatorial election campaign that was marred by sectarian rallies. Having previously refused to apply for parole, he will be released on Thursday after serving two years.

Politics, however, is not completely off the table.

"If it is for national interests and for the sake of the state, he will certainly obey and not refuse to return to the political arena," Teguh said. 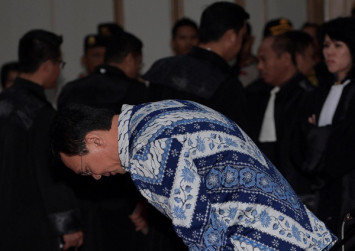 In November, Indonesian Democratic Party of Struggle (PDI-P) politician Djarot Saiful Hidayat, his running mate in the 2017 election, said Ahok would join his party if he returned to politics.

"[Ahok] said, 'If I return to politics, I will certainly join the PDI-P," Djarot said at the time.

Ahok started his political career in 2004 when he ran for the legislative council in his home province of Bangka Belitung. In 2008, he joined the Golkar Party and was elected to the House of Representatives in 2009.

In 2012, he defected to the Gerindra Party, which backed his bid in the 2012 Jakarta gubernatorial election with then-Surakarta mayor Joko "Jokowi" Widodo. He left Gerindra not long after Jokowi, who had been elected Jakarta governor, decided to challenge Gerindra leader Prabowo Subianto in the 2014 presidential election. Jokowi won, leaving his gubernatorial post to Ahok.

In 2016, Ahok signed a political contract with the PDI-P, which supported his reelection bid.