Who won Thailand election? Both sides are claiming victory

The bitter political stand-off between Thailand's rural-backed democrats and establishment elites who support military rule showed no signs of abating after Sunday's general election, with both sides claiming they have the right to form the next government after five years of junta rule.

After a tumultuous 24 hours - replete with complaints about the election commission's announcements on the progress of vote counting - official results showed the two top parties were the Palang Pracharat party backed by the military and the Pheu Thai party linked to exiled former prime minister Thaksin Shinawatra.

The third-biggest party was the newcomer Future Forward party, which stunned observers by grabbing 80 seats after being founded just last year.

The party's billionaire leader Thanathorn Juangroongruangkit, a former supporter of Thaksin's bloc and an ardent critic of the junta who has been nicknamed 'daddy' by his fans, suggested he was personally ready to be prime minister of a broad pro-democracy coalition. He said his top preference however was for the Pheu Thai leader Sudarat Keyuraphan to assume the role. 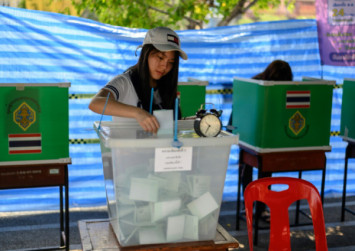 Meanwhile, Thaksin, in Hong Kong after attending his youngest daughter's wedding in the city last Friday, penned a commentary in The New York Times blasting the junta and the election commission for "manipulating" the vote.

"Whether or not the junta leaders now allow the pro-democracy parties to form a government, they will find a way to stay in charge," he wrote. "They have no shame, and they want to be in power no matter what."

His main political proxy, Pheu Thai, however, was not taking the result lying down.

It said on account of having won the most numbers of seats it had begun talking to other anti-junta parties about forming a coalition government in the 500-seat parliament.

On the opposing end, the Palang Pracharat said it was also in the thick of cobbling together a coalition. It cited its capture of a majority of the popular vote as a sign that the Thai people wanted it, and not Pheu Thai, in government.

"Palang Pracharat will talk to like-minded parties who share the same ideology and standpoint to move the country forward, which will take a while," he said.

It is seeking to make junta chief Prayuth Chan-ocha a democratically elected prime minister and supports the military playing a key role in politics during civilian rule.

The election commission on Monday afternoon released results for 95 per cent of the constituency seats, with the full results to be released after the May 4-6 coronation of King Maha Vajiralongkorn.

The 500-seat parliament comprises 350 constituency wards and 150 party list seats. Party list figures were not released by the election commission.

Of the constituency seats, Pheu Thai was shown to have captured 137 seats compared to Palang Pracharat's 97 seats.

But under a complex election system that mixes first-past-the-post and proportional representation formats, Palang Pracharat is set to win a sizeable number of party list seats while Pheu Thai is projected to win none. The Bangkok Post projects Pheu Thai will ultimately end up with 135 seats, Palang Pracharat with 119 seats, and the Future Forward Party with 80 seats.

Observers say the system was designed by the junta to benefit Palang Pracharat; the military rulers say the system prevents large parties from having a skewed representation in parliament through the party list.

Pheu Thai needed to win by a crushing margin to have had any chance at power.

But as it stands, it is Prayuth's party that is within a whisker of reaching a crucial 126-seat threshold in the 500-seat lower house, enabling the junta chief to remain as prime minister.

Prayuth will need the support of 376 members in the bicameral 750-seat National Assembly but the 250 senators are all junta appointees and will back his prime ministerial bid.

Political scientist Titipol Phakdeewanich said the likelihood of Palang Pracharat forming a government with the help of the unappointed senate contravened democratic principles.

"Under the parliamentary system, the party with the highest number of seats in the house should form the government," the Ubon Ratchathani University professor said. "If the Palang Pracharat forms the government, it will lead to many questions."

The political quagmire is the latest episode in the Shinawatra bloc's long running rivalry with the country's traditional elites - an alliance of royal courtiers, old money, and metropolitan elites.

The bloc has for two decades channelled populist support from Thailand's rural provinces in an ongoing power struggle against these establishment forces, which loathe him and his sister, Yingluck. Both were driven from power by coups.

The complicated electoral maths was just one part of the drama that confronted Thailand after the polls -- the sixth since 2001 and the first since Prayuth seized power in 2014.

Pheu Thai and Future Forward earlier on Monday said they believed the vote was riddled with "irregularities".

ALSO READ: Thai elections: Shaky hands of drunks result in spoiled ballots
Asked during a Bloomberg interview if he thought the vote was fair, Future Forward leader Thanathorn replied: "No, by far. There were too many irregularities compared to the past elections."

Hashtags translating as "Election Commission screw-up" and "cheating the election" were also trending. Some users pointed to inconsistencies between the numbers for voter turnout and ballots cast in some constituencies, and questioned the turnout of less than 70 per cent, which was much lower than expected.

Political analysts and pro-democrat supporters alike were meanwhile purring over the spectacular showing by Thanathorn's party.

James Buchanan, a Thai politics researcher with the City University of Hong Kong, said "cultural output" in recent times had shown the level of support the party enjoyed. "But now we have clear evidence of how far and wide the Thai youth's political awakening is - and it is sending shivers down the spines of the old conservatives."

The Democrats, traditionally second-placed behind Thaksin's bloc, meanwhile watched their support collapse and were projected to win 49 seats, well short of the 150 seats they targeted.

The party's long-time leader Abhisit Vejjajiva, who was prime minister of an unelected minority government from 2008-11, on Sunday said he would step down.

The regional Bhumjaithai party, which campaigned on a platform promising complete legalisation of recreational marijuana, reprised its role of political kingmaker, with projections showing it finishing fourth behind Pheu Thai, Palang Pracharat and Future Forward. Its leader, Anutin Charnvirakul, a one-time Thaksin loyalist, could yet form a coalition with Prayuth.

Anuthin said before the polls his party would be "pretty indispensable" to the two major factions if they wanted to form a coalition government.

All things considered, analysts say Prayuth will be prime minister of the next government.

But regardless of who occupies the political hot seat, the consensus is that the country's political gridlock is here to stay. Sunday's vote had been billed by some as a means to end the Thaksin-military rivalry, with both sides given the opportunity to engage in an ultimate battle.

Harrison Cheng, from the risk consultancy Control Risks, said this was far from the case. "Regardless of who gets to form the government, the new minority government will likely run into serious problems trying to pass laws because they do not have a simple majority," said Cheng, his firm's lead analyst for Thailand.

He said there was likely to be intense horse trading in the days ahead.

"If a Palang Pracharat-led coalition prevails, expect resistance from Pheu Thai and possible protests after the king's coronation in May. If a Pheu Thai-led coalition gets its way, be prepared for extensive military meddling that will aim to delay the formation of a new government."

Thaksin in his commentary suggested a Prayuth-led government may equally be on tenterhooks.

"Palang Pracharat may be able to select the next government without controlling a majority in the house of representatives. But without a majority, the party will be heading a very unstable government," he wrote.