Why do Koreans watch others studying alone on YouTube?

PHOTO: YouTube/The man sitting next to me

A YouTube creator preparing for a state-run tax accountant's exam, turns on a camera before he begins studying. The camera shows him reading a book, flipping the pages and jotting down things in his notebook for hours. The footage is live streamed via his channel from 8 a.m. to midnight except for a one-hour lunch and dinner break.

The Korean, whose YouTube channel is titled "The man sitting next to me," is broadcasting what he does, namely, study, without saying a word. Strangely enough, some 100 viewers on average tend to tune in to watch his endeavour real time. The channel has drawn more than 7,000 subscribers in two months. The live chatting corner featured next to the video is plastered with comments cheering him on and encouraging others to study hard, such as "Good morning! Let's do this!"

The YouTuber in question is one of many test takers in Korea who regularly stream videos of themselves studying. Just as "meokbang" (also known as mukbang or "eating show") swept the internet, "gongbang" (short version of "gongbu bangsong," a Korean phrase for "study broadcast") has now emerged as a new trend among Koreans.

According to YouTube, more than 4,000 self study videos have been uploaded this year in Korea and their view counts are on the rise.

Besides YouTube, gongbang videos are found on Afreeca TV as well, a popular online video platform in Korea. Afreeca TV features a "self-study" category that shows a collection of live study-related broadcasts.

Though the details vary from channel to channel, the basic concept of gongbang videos remains the same. Streamers study silently with a timer that indicates how much they have been studying so far. Some only show their hands in the screen to hide their identities, but others openly reveal their faces and voices through the video. Many of the self study broadcasts feature soft background music or white noise to help them or viewers focus on studying.

According to the YouTuber who runs the "Man Sitting Next to Me" channel, self study broadcasts can motivate both viewers and streamers.

"Solo test-takers constantly battle against the feeling of loneliness while studying alone," he told The Korea Herald, adding that a real-time comment function on YouTube allows them to engage in online social interactions.

As most of the viewers consist of students or test takers, they tend to encourage each other via the comments by sharing inspiring study quotes or leaving their attendances every day.

"By watching gongbang and engaging in real-time chatting, people can stay motivated and feel a sense of belonging. They can also share their study tips and test information through the comments," the streamer said.

As a streamer, he said he could focus on studying more effectively when he carries out the gongbang.

"When I think about all the eyes watching me on the live streaming video, I can't slack off on studying. Another benefit is that the live schedule forces me to study for a fixed amount of time every day," he said.

Yoon Min-young, a 23-year-old college student who is preparing for a law school exam, said such live streaming videos drive her to study extra hours every day.

"I feel a sense of rivalry when I see streamers sitting down and reading books for a long time. Whenever I feel like giving up on studying, I watch gongbang and recharge my motivation," Yoon said. 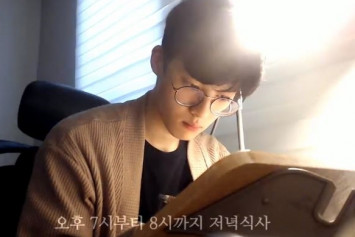 "At the same time, I feel relieved especially when I see those live videos on quiet, lonely nights," she said. "They make me feel I'm not the only one who stays up all night for studying. I've never met the gongbang streamers in person, but they have already become my good study buddies and pacemakers."

Among time management skills featured on self study videos, some streamers in Korea opt for the "Pomodoro Technique." The study technique uses a timer to break down work into intervals, often 25 minutes in length separated by 5-minute breaks.

"The Man Sitting Next to Me," for example, features an alarm clock that rings every 50 and 10 minutes. If he does not come back to the desk after the 10-minute break, viewers send live comments such as "Where is he?" and "Hey, the break is over!"

"I run this (gongbang) channel to encourage bursts of productivity, as I wish for all of us to achieve our dreams in a short time. Even if I become a tax accountant, I'll keep streaming my study session whenever I need to be focused and motivated," the YouTuber said.