Why is Indonesia intensifying its crackdown on the Khilafatul Muslimin group?

A convoy of motorcyclists in green jackets, who last month sparked an outcry after they waved banners promoting turning Indonesia into a caliphate, are part of an Islamist group that includes members from as far away as Australia, police said.

On May 29, the men converged in the east of capital Jakarta on motorbikes holding up banners bearing the words, “Greet the Rise of Islamic Caliphate”, in an incident which went viral on social media. A similar convoy occurred in Brebes, Central Java.

Police said the convoy belonged to an Islamist group called Khilafatul Muslimin, which aims to turn Indonesia, the democratic country with largest Muslim-majority population in the world, into an Islamic theocracy.

Based on data seized from the group’s headquarters in Lampung, Sumatra island, it has “hundreds of thousands” of members, CNN Indonesia quoted Jakarta police spokesman Endra Zulpan as saying.

The emergence of Khilafatul Muslimin underscored the continued existence of extremist groups seeking to install Islamic rule in Indonesia, a secular democratic state.

Sofyan Tsauri, a former member of al-Qaeda Southeast Asia, told This Week In Asia that such underground groups opposing Indonesia’s democratic systems “will always be around”.

“Clearly they are a threat, [causing] distress in society in terms of their ideology. Khilafatul Muslimin has formed a structure of a country within a country. But they stay away from violence,” said Tsauri, who spent five years in jail for helping to arm terror groups.

He was released in 2015 and left al-Qaeda. He now supports Indonesia’s counterterrorism efforts by sharing his knowledge at seminars.

Analysts say Khilafatul Muslimin has been around for several years, but little was known about the group until police raided their premises after the motorbike convoy incidents.

Its leader, Abdul Qadir Hasan Baraja, 77, a militant twice convicted and jailed for terror offences, was arrested in Lampung.

Ahmad Nurwakhid, director for terrorism prevention at Indonesia’s National Counter-Terrorism Agency, told This Week In Asia that Baraja had a “track record of violence in Indonesia”.

“He has twice been jailed for terror cases. He was a member of the radical groups like Indonesian Islamic State, and was involved in the founding of Majelis Mujahidin Indonesia,” Nurwakhid said. “He then set up Khilafatul Muslimin which he stressed on setting up a caliphate.”

Nurwakhid described Baraja as an “ideologue” whose role was to draft the group’s doctrine. “From an ideological standpoint, that is very dangerous for the republic of Indonesia as it is in opposition with the philosophy and constitution of the country.”

He added there was so far no data suggesting that Baraja had undergone paramilitary training.

According to Robi Sugara, a lecturer and counterterrorism analyst at Syarif Hidayatullah Islamic University in Jakarta, Khilafatul Muslimin had been around even before the global terror group Islamic State (Isis) was established.

Sometime in 2014, Sugara noted that Khilafatul Muslimin had expressed “support for Isis” on its website, but there were no calls to join the group.

Ahmad Sobirin, analyst with Jakarta-based Centre for Radicalism and Deradicalisation Studies (Pakar), said Khilafatul Muslimin existed around mid-2000 based on his monitoring. 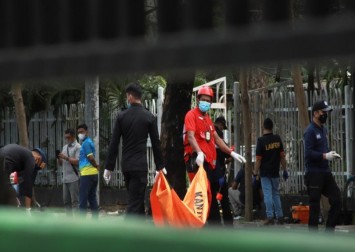 The group had a leadership structure that was similar to the Indonesian government’s, and even had “a cabinet and agencies” to run state activities, Sobirin said.

“Their members are increasing year by year,” he said. “They have around 15,000 members and another 20,000 sympathisers.”

According to Sobirin, the group has members in Malaysia, Philippines and as far afield as Australia. The group recruits through a cell system, religious boarding schools, religious classes run by Khilafatul Muslimin, he said.

“These schools are spread almost throughout the entire country, from Aceh to Maluku Islands [in eastern Indonesia]. It is estimated they are in 25 provinces,” Sobirin said. Indonesia has 34 provinces.

Noting the government had not taken action against the group prior to this, analyst Sugara questioned the timing of the decision. “Maybe this government is taking steps to ensure that religious issues do not emerge during 2024 elections,” he said.

In recent years, the Indonesian government has disbanded several Islamist movements fighting for Indonesia to become an Islamic caliphate, including the hardline Islamic Defenders Front (FPI). Some senior FPI leaders were also jailed.

Sugara said the disbandment and jailing of Islamist figures would not deter such groups. They could only be “fought” by changing the “orientation in the narrative of an Islamic state”, he said.

“The alternative narrative is that the caliphate is a product of history and not an obligation for Muslims,” Sugara said.