A man wearing a protective face mask, amid the coronavirus disease (Covid-19) pandemic, makes his way at a local shopping street in Tokyo, Japan, on May 5, 2021.

With global temperatures soaring this summer and meteorological warnings of more heat and humidity on the way, Japanese weather experts are proposing new classification terms to more accurately describe the intensity of conditions.

But these definitions are no longer adequate after June saw the highest temperatures since records began in 1875, with parts of Gunma prefecture at 40.2 degrees. June was also the first time that temperature in Japan exceeded 40 degrees for the month.

After polling 130 forecasters and experts, the Japan Weather Association put forward suggestions for more extreme temperatures, proposing that temperatures over 40 degrees be classified as a kokushobi, meaning a “cruel heat day” while a night when the thermometer does not dip below 30 degrees should be described as a chounettaiya, a “super tropical night”.

The weather association, a non-governmental group of individuals and organisations in the meteorological sector, said that alternative suggestions from its members had included “burning hot days”, “scorching days” and “boiling hot nights”.

“In the past, a temperature of 40 degrees Celsius was unheard of but it is not uncommon now,” said Kimiko Naraoka, a weather forecaster for Nippon Television. “It has now become necessary to communicate to people that this is more than just an extremely hot day.”

“We are also seeing more days when it is difficult for people to sleep,” she added. “But I still hope we will not see these terms being used too often.”

Takeshi Tendachi, a member of the association and a forecaster for Fuji TV, admitted that soaring temperatures around the world are a serious cause for concern.

“This summer’s record-breaking heatwave in Europe is everyone’s problem,” he said.

“How should we deal with disaster-level temperatures in the future? How can we avoid elderly people suffering from heatstroke in their homes at night? I’m very worried and it is important that we communicate the dangers to people.” 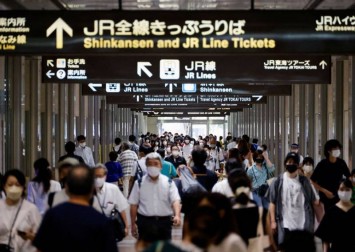 According to the association, temperatures in Japan have only exceeded 40 degrees Celsius on 67 occasions since 1875. But just eight of those times occurred in the 125 years to the year 2000, with most readings over 40 degrees occurring in the years since the turn of the century.

The pace of rising temperatures is also increasing, with 40 reports of exceeding the 40-degree threshold since 2018.

Japan saw its highest temperature in 2018, with a 41.1 degrees reading in Saitama Prefecture, north of Tokyo. The same temperature was recorded in 2021 in Shizuoka Prefecture, southwest of the capital. The association has warned that “this record could be broken at any time”.

The Japanese government on Monday issued a warning for “sweltering heat” across the country over the next week. Temperatures above 36 degrees and elevated humidity levels are expected, both higher than the average for this time of year.

Officials are calling on the public to remain hydrated and take precautions against heatstroke, and to keep an eye on elderly neighbours.

Officials also advised the public not to “endure” the extreme heat to save money in light of rising energy costs. Instead, they should set the air conditioning at a slightly cooler setting and sit directly in the draft of cool air.

Demand for electricity has already spiked to record highs this summer. The 52,700 megawatts consumed in a single day in late June easily outstripped the previous record high of 47,300 megawatts in the summer of 2018.

To cope with soaring demand for power, the Japanese government is stepping up efforts to return a number of nuclear reactors to operational status, 11 years after the Fukushima Daiichi nuclear crisis.