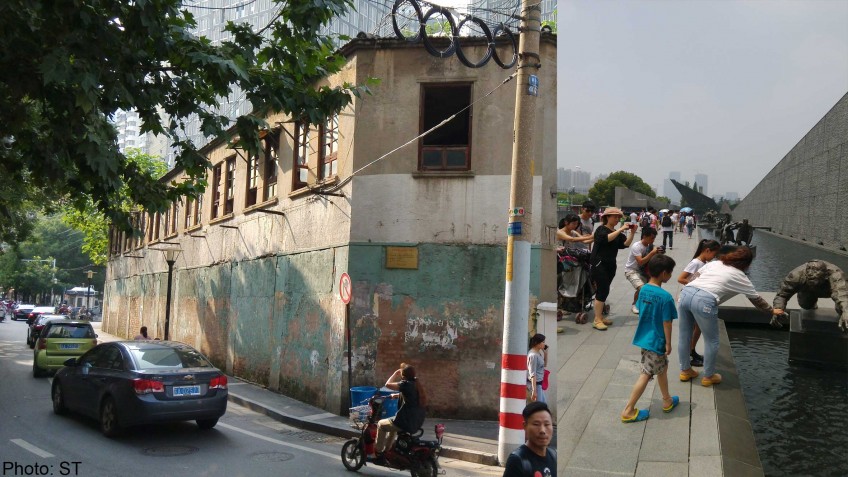 Nanjing native Lu Yanfa, 52, remembers well the stories of Japanese wartime aggression that he heard as a boy on his grandmother's knee.

When Japanese troops invaded China in 1937, she was a teenager, a dangerous age for a girl in wartime. So she and her sisters would smear ash across their face to avoid attracting the soldiers' lustful attention.

"This history is in our blood, not from textbooks or TV. That's why we are so worried about what is happening in Japan," said Mr Lu, a security guard with a daughter, 19.

"First, they denied what happened in the war, the massacre and the comfort women. Now they are letting their troops fight wars again. We don't want war, but China can never let what happened in Nanjing happen again."

It followed Mr Abe's controversial visit last December to the Yasukuni Shrine, which commemorates Japan's wartime dead including 14 war criminals, and his comments in March that comfort women were not coerced in the "strict sense".

China perceives Mr Abe's agenda to be nothing less than a denial of Japan's wartime atrocities so as to facilitate remilitarisation, and has mounted a domestic and regional propaganda campaign in response.

This year, Beijing submitted the comfort women's historical records for inclusion in the United Nations' world memories project and, since Mr Abe's constitutional move, has released one confession a day from 45 Japanese prisoners of war.

It has also quietly pushed forward long-standing efforts for redress of the two biggest groups of wartime victims: the 40,000 Chinese men abducted to do manual labour in Japan and the 200,000 Asian comfort women who served Japanese soldiers during the 1937-1945 Sino-Japanese war.

As ground zero of the Japanese invasion and a city whose modern identity is still indelibly marked by its wartime history, Nanjing has also swung into high gear.

The city of eight million is arguably where the wartime wounds cut deepest and anti-Japanese sentiment is the strongest in China.

From Dec 13, 1937, Japanese troops undertook a six-week sacking of the city that China believes killed 300,000 people. Historians call it "the rape of Nanjing".

Every Dec 13 at 10am, the city stops as sirens blare for half an hour to mark the start of the atrocity. Annual school trips to the graphic Massacre Memorial Hall are de rigueur.

Almost all 15 Nanjing residents interviewed expressed aversion to Japan, citing personal stories. They reeled off negative characteristics about Japan and the Japanese as if these were universally recognised.

They say that unlike Germany, Japan has played down or denied its wartime atrocities. In 1970, German Chancellor Willy Brandt laid a wreath at the Jewish ghetto memorial in Warsaw, Poland, before falling to his knees in a moving act of remorse for German aggression in World War II. That paved the way for reconciliation in Europe.

"The Japanese TV news doesn't talk about the anniversary. Their textbooks don't say anything. Since they want to pretend it didn't happen, of course we cannot let it go," said computing studies undergraduate Tang Bowei, 21.

Such sentiments have heightened since Japan nationalised in August 2012 part of the Senkaku/ Diaoyu islands that it administers, but are contested by China.

In Nanjing, a multi-million-dollar expansion of the Massacre Memorial Hall is ongoing. Last month, the city declared a former military brothel a heritage site - the burnt-out husk of a building sticks out like a sore thumb in the vibrant business district.

And since China's parliament has now set Dec 13 as a national memorial day, Nanjing this month launched a website on the incident in Chinese, English and Japanese. Previously, the day was marked only in Jiangsu province, whose capital is Nanjing.

"Of course this is all a reaction to Abe," said Nanjing University cultural studies assistant professor Yao Yuan. "The message is, you can deny what happened, you can arm your troops again, but China will never forget. And we have the evidence."

Exhibit A in Nanjing is now No. 2 Liji Lane. The largest military brothel during the war, it is the only one to have been identified by a former comfort woman as her place of captivity.

This year, after an 11-year battle, conservationists succeeded in getting the block of buildings designated a heritage site. This means that it cannot be sold to developers or demolished and any restoration can be carried out only by approved contractors.

The process was delayed, said Nanjing Normal University professor Jing Shenghong, because of the enticing land value of the site and the fact that for a long time, China was reluctant to examine the issue of sex slavery during the war, considering it shameful.

The turning point came earlier this year, when the central government's propaganda agenda dovetailed with the conservationists' efforts.

"Once the central government came to see it with a level of importance, then everything happened quite quickly," said Prof Sheng, one of the conservationists behind the campaign.

Some Nanjing people are fully aware of Beijing's political agenda.

"They need a villain to unite Chinese against so we won't notice that the economy is slowing down and there are so many problems in China," said teacher Wang Xiaofeng, 29.

"The Japanese make perfect villains because it was the Communists who fought against them and freed us."

These days, even commemoration comes with a price. When The Sunday Times asked staff at the Nanjing Massacre Memorial Hall for contacts of massacre survivors to interview, it was told it would be 400 yuan (S$80) per interview.

The money, they said, would go to the survivors and their families, to defray the financial and emotional costs of the harsh media spotlight.

In fact, the decision to designate the former brothel as a heritage site has not sat well with the local government, whose coffers would have been enriched by its sale.

It slapped an identifying plaque and a stone tablet on the site, but otherwise left it dilapidated and filled with rubbish. At least three squatters have moved in.

One of them, Madam Chen Zhengfeng, 52, from Anhui province, claimed she and her husband were staying there temporarily while their home was being renovated. They sleep on thin bedding spread over broken concrete slabs.

"It's not so good here," said Madam Chen, a cleaner. Asked if she knew the significance of the place, she shrugged: "It has something to do with the war."

Outside, two middle-aged women selling ginger grumbled about the mosquitoes and stench from the heritage site wafting into their apartment complex. One of them said: "Why don't they get rid of it?"

In Nanjing, Japan is ever-present. The city's identity is still intertwined with the most painful episode of its history, and its relationship with its former oppressors swings back and forth between rage and rapprochement.

For all their anti-Japanese posturing, Nanjingers still flock every year to see the cherry blossoms, which mark the start of spring. And some actually want Sino-Japanese ties to improve.

Bicycle repairman Fang Ling, 48, said that there has been a marked drop in Japanese tourists to Nanjing over the past few years.

"This is not a good thing, because it was better when we had the chance to interact in person. I hope that they will start coming back soon."