But as a diplomat – he has served as India’s high commissioner to Australia, Pakistan and Cyprus – his response was also couched in mild language.

“I was surprised at why he should comment at all on India’s internal domestic issues such as the number of MPs with criminal charges and that too from a friendly nation like Singapore with whom India has pretty good relations,” Parthasarthy said.

The reactions that poured in to Lee’s opinions were along the expected political lines, reflecting deepening divisions fuelled by rising Hindu nationalism.

India lodged a diplomatic protest with Singapore and its Ministry of External Affairs (MEA) summoned Singapore’s envoy in New Delhi to express its displeasure.

For the opposition Congress Party, led by Nehru and currently still run by his descendants, it was a time to exult in Lee’s praise for their venerated icon. Nehru was the leader of India’s movement to gain independence from the British and in his speech on Tuesday, Lee praised him and India’s other founding fathers for their “high ideals and noble values”.

“The leaders who fought for and won independence are often exceptional individuals of great courage, immense culture, and outstanding ability,” said Lee, who was speaking as part of a debate over a lying scandal relating to the opposition Workers’ Party.

Lee, describing how healthy democracies could “go downhill”, referenced media reports that said 43 per cent of MPs in the current parliament had criminal charges against them, adding that he was aware of talk that these charges were politically motivated. Indeed, the charges are a source of great chagrin for many Indians who believe the political system has become criminalised.

His remarks were widely reported and debated in India, especially on Twitter . All media outlets carried stories on the MEA’s reaction, displaying them prominently on their websites. However, there was little discussion of why Lee’s remarks were especially galling.

For Prime Minister Narendra Modi and members of his Bharatiya Janata Party (BJP), Nehru is a figure to be despised.

They belittle Nehru at every opportunity as the man responsible for almost every ill that ails the country. Hating Nehru and everything he stood for is a BJP hobby. As a Westernised statesman who was culturally cosmopolitan, politically liberal, not at all overtly Hindu or even religious, Nehru epitomises the values that the BJP scorns.

Said political analyst Parsa Venkateshwar Rao Jnr: “They hate him for three reasons. First because they have an inferiority complex because Nehru studied at Harrow and Cambridge. Second, people adored him. And three, because he thought Muslims were an essential part of India and hated Hindu communalism.”

“On the one hand, people are facing problems of inflation and unemployment, on the other, the government, in power for the last seven and a half years, rather than admitting their mistakes … is still blaming first prime minister Jawaharlal Nehru for people’s problems,” Singh said.

Aside from the content of Lee’s speech, the reason for the extensive coverage of it was that Indians are very sensitive to any criticism from foreigners, whether it is about their politics, society, culture or even food. US celebrity Oprah Winfrey discovered this first-hand when she expressed her surprise that Indians “still eat with their hands” during a 2012 visit. 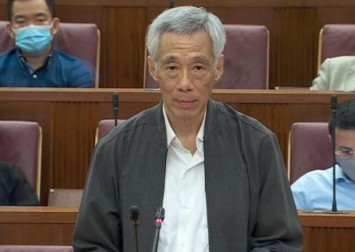 Last year, when Canadian Prime Minister Justin Trudeau expressed his concern over the prolonged farmers’ protest against agricultural reforms, New Delhi told Trudeau to mind his own business, calling his concern “unwarranted”. As for Lee’s remarks, a government spokesman said they were “uncalled for”.

On Twitter, BJP supporters had their caustic revenge, suggesting Singapore, which has been led by Lee’s People’s Action Party since 1959 with a small opposition presence, “should be the last country lecturing India on democracy”.

Top Indian strategy analyst Brahma Chellaney posted on Twitter: “Singapore, limiting freedoms of expression, assembly and association, has long functioned under the shadow of one party and one family. So, it’s ironic that its PM critically referred to genuine democracies like India and Israel while standing up for Singapore’s political system.”

Congress Party politicians chose to milk Lee’s comments for what they were worth. Party leader Manish Tewari said India should be thankful to Lee for “holding up a mirror”, while his colleague Jairam Ramesh tweeted: “Singapore PM invokes Nehru to argue how democracy should work during a parliamentary debate whereas our PM denigrates Nehru all the time inside and outside parliament.”