JAKARTA - The lack of varied and critically minded student movements in Indonesia might have contributed to the growing radicalism on campuses after the fall of Suharto, experts say.

Campuses have long been recruitment grounds for radical Islamic groups, with the State Intelligence Agency (BIN) noting in 2017 that 39 per cent of state university students across 15 provinces in Indonesia had shown an interest in radical teachings.

"Radical (Islamic) teachings started entering universities when the Suharto regime implemented the NKK/BKK policy in the 1980s, by which students were banned from political activities. The vacant political space then made room for radical groups to enter," the Habibie Centre research director Mohammad Hasan Ansori said during a discussion on campus radicalism on Thursday (May 30).

Mr Ansori was referring to Suharto's New Order policy that barred external organisations affiliated with political parties from setting up inside campus.

Among these organisations were the Indonesian Nationalist Student Movement (GMNI) and the Association of Islamic Students (HMI), both of which had produced well-known politicians, such as Vice-President Jusuf Kalla.

As a result, the organisations are not funded nor directly facilitated by state universities.

Mr Saiful Umam, former executive director at the Centre for the Study of Islam and Society (PPIM) at Syarif Hidayatullah State Islamic University (UIN Jakarta), said the policy resulted in the proliferation of Islam-related campus activities organised by Muslim student groups in each university, usually known as the Campus Dakwah Institution (LDK). 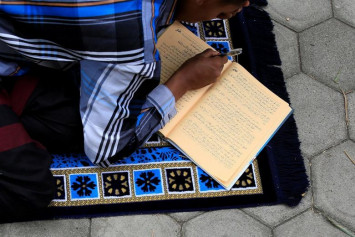 The problem was that the LDK, funded by state universities, had a conservative bent, Mr Saiful noted.

"Universities should provide more room for student activists so that they can contribute to the discourse surrounding religion. Even if they're not institutionalised, at least the discourse won't be dominated by the relatively conservative LDK," he told The Jakarta Post on the sidelines of the discussion.

Observers have raised concerns over the LDK's teachings as the organisation trains rohis or students who become Islamic study assistants in extra-curricular activities in high schools. Such rohis frequently join the LDK once they enter universities.

"The LDK is massive and conservative, and being conservative is only one step away from being extremist. Once the members are exposed to the networks and narratives, they turn extreme," Mr Ansori said.

In a 2016 survey conducted by the Wahid Foundation and the Religious Affairs Ministry of more than 1,600 rohis participants as respondents, it was found that 33 per cent of them defined jihad as a holy war against non-Muslims, 41 per cent would support any cause to turn Indonesia into an Islamic state under a caliphate, while 60 per cent would go on jihad to countries like Syria if they had the chance.

A psychologist from the University of Indonesia and an expert member of the National Counterterrorism Agency (BNPT), Mr Hamdi Muluk, said that students must be exposed to a variety discourses to prevent them from adopting extremist teachings.

"Students should refrain from having singular identities, such as only being rohis. They should be in contact with various groups, so that they will naturally grow to become open-minded," he said during the discussion.

Mr Saiful shared this sentiment, adding that the solution might also help address another issue that is heavily linked to campus radicalism, which is intolerant teachers.

"Banning the LDK would only be counter-productive. Universities should understand the map of student movements better and supervise them," Mr Saiful said.

Mr Ansori echoed the statement, adding that universities should go as far as to heighten monitoring of campus mosques, where more radical groups such as the Hizbut Tahrir Indonesia (HTI) and the Indonesian Islamic State (NII) could also spread their teachings and recruit members.