A Chinese woman who created a new life after losing her memory 15 years ago started the new year by tracking down her birth family and has plans to meet the daughter she left behind.

Wei Xiuli, who was born in Hubei, central China, was reunited with her family on New Year's Eve after losing touch with them in 2003, according to Chinese media reports.

Wei, who worked at a factory in Shenzhen, Guangdong province, said she lost her memory after a fire broke out in the plant in 2003. A colleague told her she took a blow to the head as she jumped from the building to escape the blaze, she said.

Wei later married Chen, a colleague who looked after her as she recovered, and the couple moved to Huanggang, also in Hubei, Shanghai-based news outlet Thepaper.cn reported.

Wei's family in Hubei lost touch with her, according to relatives. 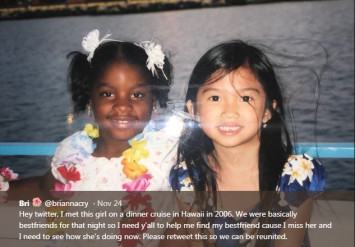 "They said I had married before and even had a daughter. I don't remember any of these," Wei was quoted as saying.

She had no memory of her earlier life but was left with a faded photograph of a man and three children and an identity card with her name, year of birth and a village address in the Hubei city of Lichuan.

Throughout the 15 years of her new life, Wei wondered who her parents were and last week decided to find her family.

She travelled to Lichuan with the old ID and photo last Wednesday, and asked police for help in seeking her relatives. The address on her identity card was a dead end as nobody in the village today had the surname Wei.

But the police - who suspected the identity card was a fake - decided to take her to the village, hoping someone would recognise her or the people in her photograph, the report said. By coincidence, Wednesday was the village's committee election day and many people had gathered, although none recognised Wei.

She began crying in desperation, but a 60-year-old woman told her the man in the picture resembled someone named Lin in another village called Mabao. Police located Lin's son, who claimed to have lost touch with a sister many years ago and the two were reunited.

The man recognised Wei as his sister immediately and they hugged and burst into tears as neighbours applauded, according to the report.

The brother, who was not named, said the man in the picture was their father, while the three children were Wei's daughter and nephews, whom her first husband had looked after.

The police then reunited Wei with her father on New Year's Eve. Weeping, he asked: "Where have you been so many years? How did you manage to come back?"

Wei spoke to her daughter, who is studying at a university in Huanggang, by phone.

The report said mother and daughter had arranged to meet, but made no mention of her first husband's whereabouts.

This article was first published in South China Morning Post.​