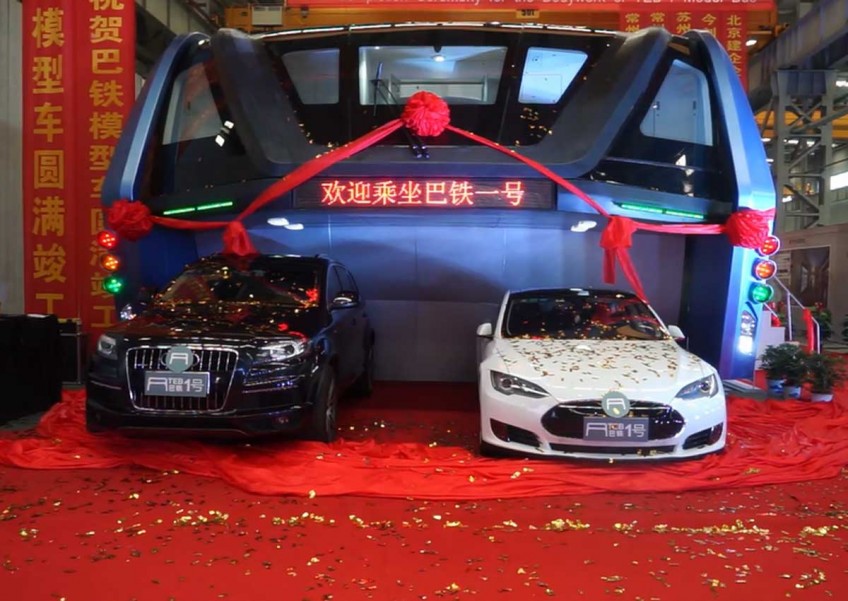 A 2-metre high bus that allows cars to pass under it while transporting commuters is fast becoming a reality, as China unveiled a completed life-sized model on Sunday.

The bodywork of the world's first "straddling bus" was unveiled in Juangsu, China, by inventor and chief engineer Song Youzhou.

Known as the Transit Explore Bus, the track-based vehicle is designed to be high enough to let cars pass under it.

The design concept was first unveiled at the 19th International High-Tech Expo in Beijing in May and the bodywork for the bus has since been completed. According to a previous interview with Mr Song, this test bus is planned to be put on track in Qinhuangdao, a port city in north-eastern Hebei province.

The vehicle, which holds up to 1,400 passengers and runs 2.1-metres above ground, would span two traffic lanes, running along special tracks. It will run on electricity, cutting fuel consumption and carbon emissions.

Mr Song has reportedly been working on this concept for at least six years. He had unveiled a similar model in 2010, but the project was never realised.

The recent unveiling of the life-sized model is a step closer to fulfiling Mr Song's dreams, and if the tests are successful, it could well help to ease traffic congestion and reduce air pollution in China.